The Danger is in Here 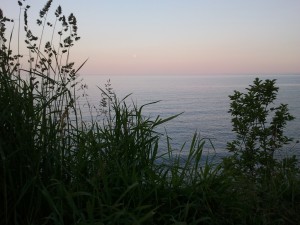 The view from the path near our house

The other night I was out trying to get some exercise after a long day of sitting and studying. I was roller-blading down a path near our house, along Lake Ontario. I came to a place where there is a clearing and a couple of benches over-looking a cliff down to the beach and out to the lake.

It was a hot, still night. There were no people, no boats, no noise, just some birds out in the lake and some gnats clouding over my head.

As I sat and looked out, all was peaceful — even serene. I thought to myself, ‘You know, from here, right now, the world doesn’t look so fallen.’ The troubles of life and the strife of nations seemed very far away. ‘Maybe this old world isn’t so bad after all,’ I thought.

But then it happened; out of nowhere everything changed. My utopian vision of the world came crashing down in an instant. How? My mind drifted — just for a moment — and I had a covetous thought. Sin. Disorder. Every vile practice. All of a sudden, the world was evil again.

But where did that evil come from? Was it ‘the world?’ Was it Satan? It was me. It was in my heart. I went to that place, all by myself, not another soul around, and in a matter of moments I had corrupted it. Me: a Christian! A pastor, no less!

And that got me thinking. Sometimes we can think of the world in suspicious categories. We can assume that all is evil in the world; that we need to be protected from the world at all costs. We can treat our children like that, too. We think that if we just protect them, if we just protect ourselves, from what’s ‘out there’ then all will be okay. But that line of thinking is dangerous.

The more we focus (and teach our kids to focus) on the dangers ‘out there’ the less we see what I saw that night, that the danger is actually a much closer enemy — the enemy within. I simply cannot run away from my sin nature. No matter how much I hide from the world, no matter how ascetic I hope to become, whether I hide in sound churches, home-school conferences, or a cave in the wilderness, the ever-present sin nature in my heart is still my number one problem.

That’s important for me to consider, I think. Here’s one reason why: The more I think of the problem out there, the more I think of myself as being a victim of ‘the world.’ That leads to pride and self-righteousness which invite the opposition of God, and the wrath of God, which leads to more sin (which I subsequently blame on the world, and around and around we go). But the more I see that the problem is actually in here (in my heart), the more I see that ‘the world’ is the way it is because it is made up of people like me. That humbles me. It shows me that I need grace, wherever I go, however much I’m involved or not involved with the world. It shows me that ‘the big bad world’ is actually made up of real people, like me, in need of grace to be rescued from themselves.

There is an evil to ‘the world’ and its systems, of which Christians are to be wary. We must be in the world but not of it. We must avoid worldliness, and the love of the world and the things of the world. The church as a whole, as the kingdom of God, must look entirely unlike the world.

But that doesn’t mean we hate the world or see all the problems as out there. It means I need to see that the reason I’m so drawn to the sins and the values out there is because of the danger in here, in my own heart.

An Honest Look Into Our Family Devotions