Recently, I heard an experienced urban minister reflecting on the reality that in most urban contexts, among most young Christians — even reformed evangelicals — church attendance peaks at around 2-3 Sundays per month.

Before you judge, honestly evaluate your own attendance over the past little while. I say that because for most of these young people, if you were to ask them, they would indicate that they are very committed. In their own perception, they are more likely to be there than not, whether or not the facts bear that out. Many think they are more faithful than they are. 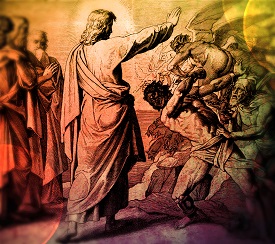 That’s been on my mind today because I’ve been studying about Jesus. Here’s what I read:

And he came to Nazareth, where he had been raised, and he entered the synagogue as was his custom on the Sabbath day and he rose to read… (Luke 4.16)

Four little words stuck out to me. Did you catch them? ‘As was his custom.‘

If there are things we tend to not like as younger people, particularly younger evangelicals, it is commandments and customs. We don’t like to be told something is necessary. But if something is good, shouldn’t it be customary? If Jesus made it his custom to go and hear the reading and explanation of the law for the first 30 years of his life before beginning his ministry, shouldn’t that inform some of our customs?

I was further rebuked by this statement from Josephus:

‘He [Moses] appointed the Law to be the most excellent and necessary form of instruction, ordaining, not that it should be heard once for all or twice or on several occasions, but that every week men should desert their other occupations and assemble to listen to the Law and to obtain a thorough and accurate knowledge of it, a practice which all other legislators seem to have neglected’ (Ag. Ap. 2.17 §175).

END_OF_DOCUMENT_TOKEN_TO_BE_REPLACED

Be Addicted, Not Intimidated

About a month and a half ago I decided that I wanted to start a new Bible reading plan. From the list of thousands available, one stuck out to me: The Bible in 90 Days.

Read through the Bible in 90 days? I wondered what kind of an insane idea this was, so I looked into it a little bit. Surely, it must be impossible, right?

Here’s what I found out:

Yeah, it’s a commitment, for sure. But really, it’s no more than watching one prime time TV show per day. Or one-third of a sporting event per day. Those are things that we do every day without blinking! So why not give it a shot? 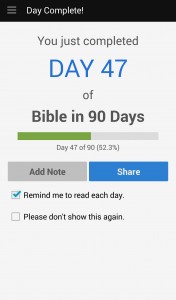 I’ve been at it for a while now. And I can honestly tell you that I don’t think I’ve ever done anything as a Christian that has reaped more immediate benefit for my soul. I’m over halfway through the Bible now, and rather than fearing my Bible reading, I’m loving it! Spending the extra time in the word each day has hooked me and formed a solid habit; I’m honestly addicted. I’m looking instinctively now for ways to spend more time in the word — I love it!

The YouVersion app has been super-helpful for reminding me and tracking my progress. I totally recommend getting it, if you don’t have it.

So GFC people, look out! Once I’m done this time through the Bible, I’ll be looking for some of you to do it with me!

Don’t Be Okay with Not Reading Your Bible

I’m a part of a bi-weekly Bible study that I love. Rather than working through a specific text together, we each come ready to talk about what we’ve been reading on our own.

It’s nice because each time we meet is very different. Also, it adds accountability. And no matter how many good reasons to read the Bible I have in theory, it’s easy to let it slip in practice. But if I show up and haven’t been reading my Bible, I’ll have to answer to the group as to why I’m not able to share with them.

But more than anything, the blessing is in the fellowship as we reflect on what God is saying to us through his word in an ongoing, relational context that is deliberately set-up to foster fellowship.

This past Monday night one of the people in our group shared something with me that really challenged me. We were talking about why we sometimes get away from regular Bible-reading and he strongly admonished us, ‘Don’t be okay with not reading your Bible!’

END_OF_DOCUMENT_TOKEN_TO_BE_REPLACED

Everyone loves a good story, right? And they’re always easy to understand, too… right? Or maybe not so much.

When we move into New Testament Narrative as a genre (basically consisting of the Gospels and Acts) we move into some of the most familiar and most beloved portions of Scripture.

But we must not mistake ‘familiar’ and ‘beloved’ with ‘rightly understood.’

New Testament Narrative may best be described as ‘Theological History’ or perhaps ‘Historical Theology.’ The term Gospel simply refers to the proclamation of good news and was typically associated with things like military conquest or the birth of a son.

While each Gospel-writer has his own purpose for writing, and therefore his own themes, we need to be familiar with big themes of the Gospels & Acts (kingdom, authority, end of the age, revelation of God, etc.). In particular, we want to see how each is deliberately trying to portray Jesus as the fulfilment of all humanity’s needs and all the OT’s expectations.

Forms of Writing in the Gospels

Parables: A parable is a short narrative that demands a response from the hearer. They are sheep-discerners (Mark 4.10-12). Some hints for parables:

END_OF_DOCUMENT_TOKEN_TO_BE_REPLACED

Here are ten hopefully helpful principles for interpreting Wisdom Literature. It’s important that we get this right, since this is God’s means of helping us to become wise.
END_OF_DOCUMENT_TOKEN_TO_BE_REPLACED

Here are ten hopefully helpful principles for interpreting Old Testament narrative. It’s important that we get this right, since this genre of Scripture makes up about 66% of our whole Bible.
END_OF_DOCUMENT_TOKEN_TO_BE_REPLACED