The OC Supertones: For the Glory

I’m not really a fan of ‘comebacks’ for bands. If it’s over, then it’s over. Leave it alone. Especially after eight years, in a genre so niche as the brand of ska that the OC Supertones got famous playing. How could a comeback possibly be successful in their case?

To make a comeback now, they’d be stuck between a rock and a hard place. Either they would need to change their sound so much that they wouldn’t really be the same band, or they’d play the exact same style and risk being totally irrelevant.

So when my brother told me this past weekend that the Supertones had a new album out — after 8 years! — I was very skeptical. But oh man, am I glad I gave it a chance!

This latest offering by the Supertones strikes a solid balance between staying true to their sound and maturing as musicians. The lyrics are thoughtful and theologically solid, even if not as consistently profound as in some of the other albums. The production quality is excellent. And there is just the right amount of yelling and fist shaking all-out ska-core that we’ve come to know and love to balance out the softer, more reflective and emotional songs.

‘For the Glory’ obviously maintains the theme of doing all for God’s glory, and God’s ultimate victory and vindication at the end of time. And really, if you’re going to make a comeback as a band, could their ever be a better reason than that? As they sing on the track, ‘For the Glory’:

I don’t care if you ever hear this,
and every cheering voice goes silent
I don’t care for the words of critics
so man just save your judgments
I believe in a God that’s listening
I believe in a truth worth telling
I believe that the stars are singing
we only want to join in
and what I thought important
it doesn’t seem to matter
our purpose, our mission
is to say that…

The album contains 12 songs in total. Some of the songs are clearly autobiographical (‘Warmth of the Sun’ and ‘Pretty Little Lie’) and some of them feature strong biblical allusions (‘The Wise and the Fool’ and ‘Down to the River’). They even continue their tradition of including at least one ‘we love California’ anthem, which is unfortunate, but hey, I get it.

All in all, there is not a bad song on the album.

In short, I love it. I highly recommend it. It’s the best $10 I’ve spent in a while. Don’t believe me? Check out some of the media below.

Maybe it’s because I’m surrounded by women in life, but this song in particular owns me.

Listen to the Whole Album

On iTunes the album is $9.99. Great price for a great album. 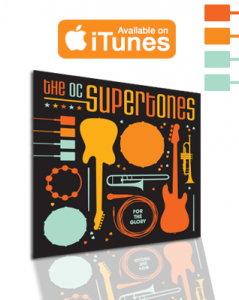