Recently for my homiletics class, I was given the assignment of interviewing my favourite pastor/preacher on the topic of sermon preparation and preaching. I’ll post some of the excerpts here. If it should strike you as interesting (and if you’re a preacher, it should!), then you can download the whole interview transcript here.

Let me also say that I’m extremely thankful to my good friend, Tom Gee, who is also in the class with me, and who contributed just about all of the good questions you’ll read in the interview.

What is the role of preaching in your church? 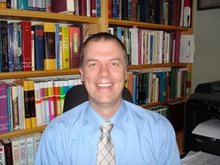 But my own spiritual observations is that the healthiest churches are ones that are driven by a vibrant pulpit ministry, and if that is coupled by real pastoring then you are forced to deal with all the other stuff. So I can identify amazing pulpit ministries that I’ve been witness to that have in my view neglected real pastoring and then half floated in “preaching centres”, that’s all it is, it’s not church. Obviously the more dominant example would be churches that are caught up in all the external peripheral things that pulpit ministry is not there.

How do you create a sermon that seeks to change people?

Having that question in mind in all of your study is going to help you decipher in the study what things are of import. So, I may need to know that this is a continuative gar or an explanatory gar, but they may not. Sometimes they do because for them to be, for the change to be effective, they need to see that this is absolutely essential for whatever reason. So I think having that question in the back of my mind, is very helpful.

And then I think that’s what drives illustration. So looking for ways to illustrate things that are cloudy, that are essential, for the ongoing change. And then, I think, prayer. As you prepare and as you preach, praying that the Lord will direct and knowing that the Spirit of God is the only agent of change.

And I find that often, I chuckle now, I was shocked earlier in my ministry, I find it kind of enjoyable now, to hear how the preached word brought change in someone’s life and 90% of the time it was nowhere in an area that I intended. People say, “you said this” and blah, blah, blah, and you just think well the Lord has his designs, I mean you laboured to do something, and no good, and that’s fine.

How do you develop illustrations? Do you gather material ahead of time?

I’m probably the worst person to talk to about that. I try to catch things I think might work, but I always forget that I have them. So I have a big file on my computer, that I’ll go to when I’m desperate. For me it’s a memory issue, I live in a 72 hour window all the time.

So, my goal is always to have at least two illustrations which are aimed at kids. I don’t always get it, but I want to have two times I can call out to kids in the sermon. Try to get into their world a little bit.
I just try to think of what’s happening in life, in news, read Google news every day. I’ve been working lately trying to use biblical examples more. Some people say you should only use OT stories, but it seems to me the Lord used a lot of things, fishermen, sheep, plants, I think we have liberty there to talk from the issues we know about. Whatever is going to make something clear; like the whole boomerang / ar-row thing, I knew it had to be illustrated somehow. I still don’t like it, but at least it was weird enough to make people think about the issue, like if they didn’t get it, they’re like “Huh?” But, that’s a good exam-ple of something that needs something to make sense, so it’s not just a thought out here where everybody can go “yeah, yeah” without really thinking about it.

What really helped me were those Walter letters. When I wrote those, I had a goal of illustration or word play or simile every sentence. I couldn’t always do it. Sometimes you need a sentence to build into it, but at least every paragraph. It got to be surprisingly easy. It really got my brain functioning in a different area. So I’m trying to pull that into my preaching. I can’t become Walter while preaching John, and that’s where it’s a little bit tricky, because it’s so tied to this imaginary character.

Biblical allusions… if you read the Puritans, they are always alluding to texts, they didn’t quote them, and I’m trying to work on that as well. You realize that young Christians are going to miss it completely, but phrases, not saying turn to Phil 2, but saying “he didn’t regard equality with God something to be grasped”, some people are going to think wow he just made that up, because they’ve never read it, but read the Puritans. Constant allusions to the text. When you start hearing it it really adds to your understanding.

Are there topics or types of things that you will intentionally use or not use for illustrations?

Illustrations are the servants of the truth. I will use anything that is not inherently sinful or offensive in the wrong sense, so long as it serves the purpose of conveying and applying truth.

It has to fit the text. Jesus used humour, but it always fit and it was not a dominant theme in his ministry; therefore it should not be in mine. There are 12 funny things I do not say for every one that pops into my head. But too much humour does two things: First, it shifts the focus off God and onto me, and second, it lightens the heaviness of truth. Like illustrations, humour must serve the truth, never obscure or diminish it.

Do you write out manuscripts for sermons or preach from notes? Do you memorize the sermon verbatim? Do you ever practice it aloud?

I am currently writing 90% manuscripts; that is, I write out 90% of what I plan to say. I take that to the pulpit and preach from it, but add to it and omit stuff from it as I go. I do not memorize the sermon, but I do try to learn the truth. Once I forgot my notes at home and did not realize until I walked to the front to preach. It was not my best sermon, but I was able to communicate the meaning of the text and preach from an outline, simply because it was all in the text. I do practice aloud on occasion, especially if there is a phrase or sentence that I want to get just right. I also find it a good way to experiment with my voice and expression.

How do you go about evaluating your preaching?

Tuesday staff meeting. I mean, you always do self-evaluation. Most of that happens as I go, as I’m preaching. If people are falling asleep… Like I was preaching the gospel—always try to include the gospel, in every sermon –and this one fellow who is a non-believer was talking in the back corner. So, in my moment-by-moment evaluation, I’m thinking they need to hear the gospel, they’re not hearing the gospel, so I start preaching into that corner. I catch each of them by eye, and I stare at them.

Some asked if I get Susan’s evaluation, and I don’t. I let her if she has something to say, but I remember Larry Crabb talking about pastors who jump in the car and the first they say is “Well?” That doesn’t need to be her role. She needs to sit under the word and not listen to me as an evaluator, she needs to be fed. At the same time, she has had some of the most helpful evaluations in my preaching, because she will see my inconsistencies and my pride faster than anybody else, and she has gently and lovingly identified that and called me out on it on numerous occasions, and it’s a great check, because now when I’m preaching I know that she’s aware of that, because she just feels that, it’s not that she’s looking for it, but she’ll just think c’mon Paul you’re being a kind of arrogant here. And I appreciate that, because I am arrogant and I would be a lot more arrogant in the pulpit if it wasn’t for my wife.

How have your sermon writing habits changed from the time you first starting preaching until now? Do you take more time or less time to prepare sermons now? Why is that?

My time is about the same. I thought it would get a lot less, but I am stupid and need a lot of time to say very obvious things! I went into more detailed study early on, parsing every word, jot and tittle, but after a while, you develop a sense for what must be done and your overall bank of knowledge increases. So I would say that there is a little less of the nitty-gritty, but maybe more on the end of application now than ever before. I have really been trying to work at that—and on illustrations as well.

What are some of the most common mistakes you’ve seen young men make in the area of sermon preparation / writing?

The basic mistake is this: they try to teach a seminary class in a church. They are more concerned about how they look than how God looks… they use archaic language, the message is sloppy, and ultimately comes out as boring and irrelevant. This is simply a result of arrogance. Humility seeks to magnify God through his revealed truth, not magnify self as the knower and dispenser of truth.

Why do you love preaching?

I feel his pleasure. I feel that this was what I was built to do. Qualified for those things. Even physically, I have a loud voice, because that’s what I think that’s who the Lord made me to be, to be a herald of the gospel. I can remember as a boy preaching at the cottage, with the waves crashing against the rock. I wasn’t even a Christian.

I always felt that that was what I was to do with my life. Wasn’t even that cognitive. I would say that I love the discovery of truth, and the challenge of packaging it in order to present it. I love the Spirit-attended energy of delivery, and looking into men’s hearts, and being given this privilege to speak and they’re going to listen, and leveraging the Spirit’s power through prayer and attendance and sticking to the word and doing things that are foolish, to see people change. And so I would say the final fruit of my love of preaching is changed lives, watching people alter their course of trajectory to become different people because the truth has come, through the Holy Spirit, to change. And you’ve been able to be a part of that. What’s not to love?
There’s even in the physical act of preaching. Lloyd-Jones talked about the electrical energy; not anxiety, but, it’s different. It’s different than talking. And, there is a pleasure even in that. Not in a sensual way, but, you follow your pleasures. I know for some people it’s terrifying to stand in front of people. I don’t like crowds. I don’t like being with people in that way.