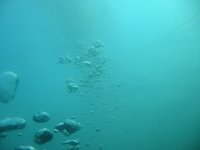 God is big… infinite, in fact. It only makes sense, then, that a finite being like me can’t understand everything about God. One thing the emergent *cough*neo-orthodoxy*cough* crew likes to point out is that we can’t put God in a box. Generally it’s phrased in a ‘witty’ sarcastic statement intended as a ‘humble’ rebuke of some ‘fundamentalist’ that goes something like this: ‘Well, I’m glad that some of you have God all figured out, but for those of us who think God is too big to fit into a little box (or sometimes ‘book’), we prefer to think that he is free to act as he sees fit.’

Sure. But no one was denying that. In fact, we would argue that the Scriptures themselves teach that God is free to act as he sees fit (even in spite of what we might choose).

The idea of God being ‘really big’ should not effect the basic doctrines the way emergents often quote it. Infinity does not negate perspicuity. When deep sea diving, it can get dark. When snorkeling, there is plenty of light to see where we’re swimming. You could very well be in the same ocean either way, but in one place the water is murky and in another it’s clear.

The same is true of God. Just as he has claimed to have not revealed everything to us, neither do we claim to know everything. But the things that God has revealed, we can and must know! The fact that God is bigger, deeper, more profound, complex and wonderful than me should not discourage me from ever knowing anything about God, but rather, should inspire to look into the mystery of his revelation all the more.

But the complex does not complicate the simple. Some aspects of God are plain. He is holy and righteous and he hates sin. He will not compromise, change his mind, or give his glory to another. He will by no means leave the guilty unpunished. He will accomplish his purpose in history, despite sinful man’s every effort to thwart God’s plan (as pictured in the cross). God will always be victorious (as pictured in the resurrection and ascension). He requires propitiation of his holy wrath, and he provided it for all his sheep in the person of Jesus Christ. He will one day raise all the dead from all time to face judgment: either unto eternal life or eternal punishment. This much is plain.

When Christ returns, I want to be able to say that I used the ‘talent’ he left us (his word) to get to know him and that I’ve spoken his truth to others, not that I buried it in the ground in order to ‘ask questions,’ because I was afraid to conclude anything about him because he’s too ‘big.’