Today Stacey and I are celebrating our 8th wedding anniversary. It is a great day for me to reflect on God’s goodness and kindness to us as a couple and as a family over these past several years. 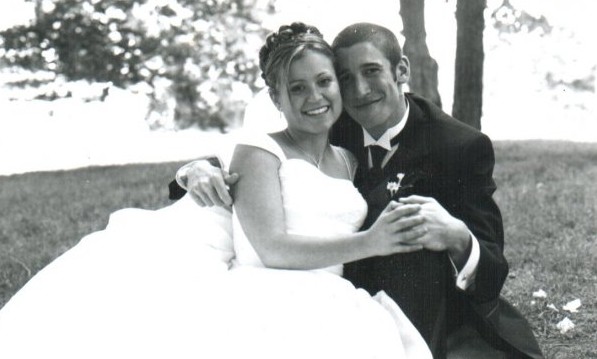 In God’s Mercy I Got a Wife

I have frequently quoted Don Carson’s distinction between mercy and grace: ‘Grace is a loving response when love is undeserved, and mercy is a loving response prompted by the misery and helplessness of the one on whom the love is to be showered. Grace answers the undeserving; mercy answers the miserable’ (from Jesus’ Sermon on the Mount and Confrontation with the World, 24-25).

God clearly gave me a wife in mercy. I was miserable, pitiable, and helpless. I was eating A&W far too often to survive past the age of 30 till she came along. I was so reclusive that I probably would have made a better mortician (and I had thought about it!) than a pastor, but now our house is a happening place. Her strengths clearly complement my weaknesses.

God, in his mercy gave me not just any wife, but my wife in particular.

By God’s Grace I Still Have a Wife

Since our wedding day I have shown myself again and again to be undeserving of Stacey’s kindness and favour. And that’s not just humble-talk. I mean honestly and truly, I have sinned against her in horrible acts and words of selfishness that I had never envisioned saying to my wife (or to anyone!). But time and again she has embodied God’s grace and forgiven me.

Some time ago, when I was younger, I heard from someone that it would be foolish to marry a girl / guy whose parents are divorced. History repeats, as the logic goes. Well, happily, Stacey and I both ignored that advice and married each other. God’s grace overcomes such foolish human notions. The fact that we, as children from divorced families, can live together faithfully and happily is a testimony to God’s grace.

Recently I was speaking to a couple who had just celebrated their 60th wedding anniversary. I asked them for ‘the secret.’ It turns out there was no secret at all. The husband simply said, ‘God’s grace is sufficient.’ I have seen that working and active in our marriage these eight years and I am thankful.

I  am Learning Love

God is love. That is why the Bible, as far as humans are concerned, begins with a wedding (Gen 2.18-24) and ends with a wedding (Rev 21.1-14). Marriage is designed to reflect something of who God is and how he interacts with his people, in love. The more we live out this parable, the more we see how much we are not God.

When we got married eight years ago, I thought I knew love. I thought I loved my wife; I thought I couldn’t possibly love her more than I did in that moment. Little did I know that our wedding day was merely the starting point of a journey into the very heart of God, learning to love and die to self for the sake of another.

Looking back I can see how I have learned love better than I knew it then. But if I’m honest I believe now more than ever that I have a lot to learn. I want to love my wife better.

Marriages Don’t Have to Be Easy to Be Good

One thing I’ve become aware of over the past few years is that we, as evangelicals who love marriage, can sometimes publicly portray our own marriages in such a glowing light that others may be tempted to despair because their marriage is not as good as someone else’s appears to be.

I want to be clear: I think there is a great burden on us (now perhaps more than ever) to uphold marriage as honourable and good (Heb 13.4). But in our effort value the institution, we must be careful to avoid idealizing our own marriages so that those looking on think that our marriage is easy and nothing but pure bliss. Very few marriages are.

We need something more than people just boasting about their ‘hot wife’ and great date nights. What we need is husbands and wives who love each other deeply and openly, admitting to struggles, but delighting in the sufficiency of God’s grace. We need couples who acknowledge the reality that marriage is hard, but worth fighting for.

Over the first few years Stacey and I were married there were a number of moments when we would both be almost bewildered by the troubles we would have. We didn’t expect these things and we thought that we were the only Christians for whom marriage was hard. Over the years, however, as we’ve gotten to know other couples and counselled people, we’ve seen again and again that almost every couple has problems (because we’re all sinners in need of grace). And for many, many people, marriage is hard.

Here’s how my thinking about that has changed: We thought at first that for a marriage to be good, it had to come naturally and easily. But what else in life works like that? The things we love and value and cherish the most are the things that we work the hardest for. The more we face difficulties and work through them, the more we learn to die to self, the more we learn what sacrificial, servant-hearted love actually is, the more we see that our marriage is becoming ‘good.’ Even though it’s not easy.

I Am Filled with Thanks

But do you know what is the one over-riding affection that overwhelms me every year on our anniversary? Thankfulness.

On June 19, 2004, Stacey Mancini walked down the aisle of a little church in Welland, Ontario to become Stacey Freeman: bone of my bones and flesh of my flesh. On that day I broke down in tears of thankfulness because I couldn’t believe that God had given her to me.

And you know what? I still can’t.