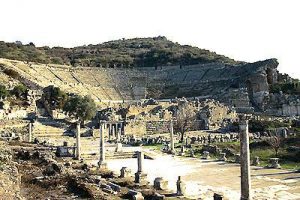 There simply was not ‘one, simple, all-accepted understanding of the roles of men and women’ back then any more than there is now. Clinton Arnold, after spending seven pages surveying the issues and views surrounding the treatment of women in society in Western Asia in the first century, highlights this reality.

‘… there were many changes in the air, and it is fair to ask whether Paul may have addressed these in his instructions to men and women. There are a few observations we can make:

(1) There was a variety of ungodly cultural pressures that husbands and wives would have felt in the environment of western Asia Minor. These would have ranged from the traditional roles of the heavy-handed dominance asserted by the paterfamilias and the unquestioning obedience of the wife to the societal trends seen in the new Roman women, who exhibited a defiance of their husbands and the traditional roles.

(2) There is no doubt that women in western Asia Minor were finding more opportunities in the civic and religious life of the communities. Some were finding a new degree of freedom from the restraint, control and dominance of men in society, politics, religion, and the household.

(3) There were also some fairly radical trends in gender identity, where some men were repudiating their masculinity, appropriating a feminine identity, serving a female goddess, and engaging in sexual relations with both men and women.

(4) In light of this diversity of trends in society, Paul writes to many Christians in Ephesus and western Asia Minor to give biblical and christological perspective on what it means to live as husband and wife. His readers come from all segments of society–they are slaves, peasants, and probably many from the urban elite. Some will have held to the traditional Greek and Roman understanding of roles, but others would probably be living the lifestyle of the new Roman women. It would not at all be surprising to find that there were some women who became Christians who once served as priestesses in the local goddess cults.

(5) Paul’s remarks to husbands and wives are counter to every cultural pattern represented in that society. His vision for marriage is not a concession to any cultural pattern, but substantially challenges them all. His plan is rooted in the creation design and profoundly informed by the relationship that Christ has with his church. 1

The bottom line is that whatever position you end up taking on the roles of men and women, you cannot simply argue that ‘people thought differently about women back then’ and that ‘things have changed.’ Sometimes that is equally true and untrue.

We need to be careful to do our research and not merely assume that we know what things were like ‘back then.’ Especially if it is the criteria we’re using to determine what is pleasing to God right now.