Could Good Come of It?

So people sought other answers. Some said, ‘God works all things for good… even this!’ Certainly, that has a ring of truth to it, too, doesn’t it? But the problem is that it’s not the entirety of truth. There are some people for whom that day didn’t accomplish good. It resulted in death and eternity apart from God. It resulted in children without fathers or mothers. It resulted in life-long injuries and ongoing cases of PTSD, cancer, and other illnesses which persist to this day. Those who pointed to the immediate good of people being brought together, and the goodness of humanity in helping fellow-man, pointed to something that was real: goodness did emerge from the rubble.

There was simply not enough good that came from that day to justify all the evil we saw. So how can a God of sovereign providence, ultimate wisdom, and pure goodness be justified in light of 9/11?

But I also wasn’t there when he created the world. I wasn’t there when he flung the stars across the heavens. I don’t know how he determined the boundaries for the oceans. I don’t know where he got the idea to create the emu or golden lion tamarin. I actually understand very little of the basic functions of life in this world. I don’t understand the way my body works, or how, when my wife and I have babies we end up with this child and not another? Some days I reflect on my own actions, attitudes, and words, and wonder why in the world I acted the way I did.

If I don’t understand the basics of creation, or how my own heart functions, why do I think that I should understand the infinite complexities of the providence of God who created in an instant with a word? He declares the end from the beginning (Is 46.9-10) — I don’t know what tomorrow brings (James 4.14). Who am I to think that I would be able to understand even if God were to take the time to explain all his reasoning to me? 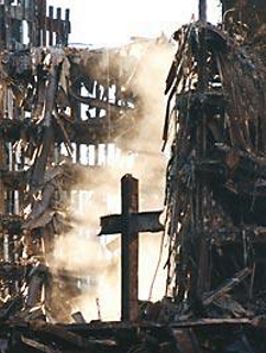 And yet, there’s this. This coming Sunday evening we’ll be baptizing a young man who was raised in a Muslim family in New York. The tragedy of 9/11 made life very difficult for him and his family in the following days and years in New York, so they moved to Canada.

God’s providence had moved this man from Pakistan to New York and now, because of 9/11, to Toronto. There he met some Christians who loved him and welcomed him in to their peer group. As the years went by his heart was softened to them and the gospel. Eventually he was converted and he now lives with the hope and an eternity with his Saviour.

No one could have foreseen the resurrection of this young man into eternal life coming from towers falling on that day. No one except God. And no one knows how many other stories there are like his from the past 12 years — and more in years to come!

We Must Not Be Quick to Judge Providence

I am reminded this morning that we must not be quick to judge God’s providence by what we see. We must not be quick to look for quick and easy answers as to why evil happens in our world. We simply don’t know what good our God will bring from it, or how many years it will take for that good to be manifested. Twelve years later we are still seeing good fruit from that day, because our God is ultimately good, ultimately powerful, and ultimately wise.

And let us never forget that our God is the God whose ultimate plan for our good and his glory involves the most horrendous act of evil the world has ever known: the murder of the Son of God. In that instance of evil, even God was made a partaker of our sorrow and suffering.

And yet, nearly 2000 years later, we’re still seeing glorious good coming from that one act of evil. The gospel is what ultimately proves it: God’s wisdom, goodness, justice, and power in providence, will all be vindicated. In time.

All of it reminds me of the words of William Cowper:

God moves in a mysterious way
His wonders to perform;
He plants His footsteps in the sea
And rides upon the storm.

Deep in unfathomable mines
Of never failing skill
He treasures up His bright designs
And works His sovereign will.

Ye fearful saints, fresh courage take;
The clouds ye so much dread
Are big with mercy and shall break
In blessings on your head.

Judge not the Lord by feeble sense,
But trust Him for His grace;
Behind a frowning providence
He hides a smiling face.

His purposes will ripen fast,
Unfolding every hour;
The bud may have a bitter taste,
But sweet will be the flower.

Blind unbelief is sure to err
And scan His work in vain;
God is His own interpreter,
And He will make it plain.