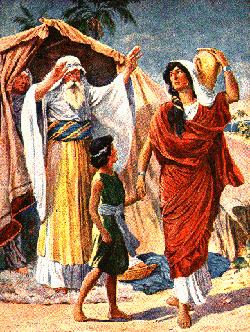 Genesis gives an interesting picture of Abraham. There were times when he was faithful and times when he was not, but overall the NT looks back on him as the prototypical ‘man of faith’ who will inherit the promises of God. The highest goal we can strive for is to be like Abraham–in fact, to have faith, in order that we may become one of his children.

But Abraham’s faith wavered. God had made tremendous promises to Abraham about his ‘seed’ and ‘blessing all nations’ and things like that. But when Abraham gave his situation an honest evaluation, it was tough for him to see how this could come about. The circumstances just didn’t look like God was going to fulfil his promises.

Abraham loved God, and believed God’s word. But he doubted that God had the power to bring about his purposes, because of the circumstances of Abraham’s life. Abraham knew that God had promised children, but knew that the chances of that in the later stages of his (and Sarah’s!) life were slim to nil.

Abraham was concerned that God be justified. He desired for God’s promise to be fulfilled, for God’s word to come true.

Many of us find ourselves from time-to-time in situations like Abraham. We know God’s commands, God’s promises, God’s declarations regarding the future. But when we look at the world the way it is–and in particular, our world the way it is–we start to wonder how (or if) God will actually pull it off.

But we want him to! We want God to be shown right! We want God to be justified in the words he has spoken and in the declarations he has made. We just aren’t really convinced that, given these circumstances, there is any way he can show himself to be true.

So what did Abraham do? He found his own way to bring about (what he thought) were God’s purposes. In his eagerness for God to be justified, he thought he would help God out, by adjusting the rules a little bit. Abraham took Hagar, his wife’s servant, and had a child by her, thinking that this would be the means by which God would be justified.

But God said no. His promises were bigger, and his power is bigger than Abraham could have imagined. Abraham may have had the right intention, in trying to show God to be just, but his problem started when he felt like God needed to be justified by us. He spent too much time looking at his own circumstances (and wondering what could possibly be done), and not enough time gazing at the God who had made the promise.

This applies on so many levels. Theologians, for example, may wonder how God could be good, fair, righteous, etc., but still demand that only men hold certain positions in the church. They think, ‘Our society is more advanced than the church of Christ!’ We wonder how God could be the things he says he is, and still insist on something so backward. So we seek to justify God by bending his rules.

My hope for myself (and for you) is that I would spend more time gazing at God and thinking about his omniscience and omnipotence, and less time thinking about my circumstances. The more I’m convinced of his infinite ability to deliver on his word, the less I’ll be tempted to justify him by compromising in my own life.