16 May, 2013 / Julian Freeman / Comments Off on Faith, Justification, Gratitude, and Action

In his excellent teaching on the meaning of faith, J.I. Packer tackles the age-old question of how justification by faith alone results in anything other than spiritual sloth and antinomianism. He writes the following: 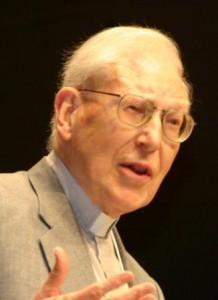 Faith abandons hope in man’s own accomplishments, leaves all works behind, and comes to Christ alone and empty-handed, to cast itself on mercy. Such is the faith that saves.

But does this mean that saving faith throws a halo over idleness, and that the gospel of justification by faith only is really hostile to moral endeavour? Indeed not. ‘Faith is a lively thing,’ wrote Luther, ‘mighty in working, valiant and strong, ever doing, ever fruitful; so that it is impossible that he who is endued therewith should not work always good works without ceasing … for such is his nature.’

What saves is faith alone, but the faith that saves is never alone; it is always ‘working through love (Gal. 5:6), becoming a moral dynamic of unparalleled power in the believer’s life. The proof that a man’s faith is real is precisely this — that it makes him work. How does it do this? By making him feel the constraint of Christ’s love for him, and the greatness of the debt of gratitude which he owes to his God. As we said once before, Christian doctrine is grace, and Christian conduct is gratitude. The believer does not do what he does as a means to being justified, but there are no limits to what he will do for his Lord out of gratitude for the justification that he has received.

END_OF_DOCUMENT_TOKEN_TO_BE_REPLACED

Did John Bunyan Question His Salvation?

6 February, 2010 / Julian Freeman / Comments Off on Did John Bunyan Question His Salvation?

You bet he did! Like most Christians throughout the history of the church, this famous believer was prone to discouragement. When he saw the sway that sin still held in his life he would begin to question whether or not God was really working in him–whether God would indeed keep him.

So what did he do?

Bunyan did excellently what we are so frequently admonishing each other to do: Preach truth to your own heart. A wonderful illustration of this is below.

Here, when faced with fits of despair and discouragement, Bunyan takes the truth of justification (forgiveness of sins and the imputation of Christ’s righteousness) and preaches it to his heart. Despite what he feels, he says to himself, ‘This is what is true. This is where I can find hope, comfort, and peace.’

We would all do well to learn from his example and follow in his footsteps when we are discouraged or downcast.

Sometimes I bless the Lord my soul hath had the life that now I am speaking of, not only imputed to me, but the very glory of it upon my soul; for, upon a time, when I was under many condemnings of heart, and feared, because of my sins, my soul would miss of eternal glory, methought I felt in my soul such a secret motion of this—Thy righteousness is in Heaven, together with the splendour and shining of the Spirit of Grace in my soul, which gave me to see clearly that my righteousness by which I should be justified from all that could condemn, was the Son of God Himself in His own Person, now at the right hand of His Father representing me complete before the Mercy- seat in His Ownself; so that I saw clearly that night and day, wherever I was, or whatever I was a doing, still there was my righteousness just before the eyes of Divine glory; so that the Father could never find fault with me for any insufficiency that was in my righteousness, seeing it was complete; neither could He say, Where is it? because it was continually at His right hand.

Also, at another time, having contracted guilt upon my soul, and having some distemper of body upon me, I supposed that death might now so seize upon as to take me away from among men; then, thought I, what shall I do now? is all right with my soul? Have I the right work of God on my soul? Answering myself, “No, surely”; and that because there were so many weaknesses in me; yes, so many weaknesses in my best duties. For, thought I, how can such an one as I find mercy, whose heart is so ready to evil, and so backward to that which is good, so far as it is natural. Thus musing, being filled with fear to die, these words come in upon my soul, “Being justified freely by His grace through the redemption that is in Christ Jesus” (Rom 3:24). As if God had said, Sinner, thou thinkest because that thou hast had so many infirmities and weaknesses in thy soul while thou hast been professing of Me, therefore now there can be no hopes of mercy; but be it known unto thee, that it was not anything done by thee at the first that moved Me to have mercy upon thee: neither is it anything that is done by thee now that shall make me either accept or reject thee.

Adoption or Justification: Which is Greater?

1 October, 2009 / Julian Freeman / Comments Off on Adoption or Justification: Which is Greater?

I found this quote from CJ Mahaney’s blog, where after discussing the doctrine of adoption, he looks at Packer’s answer to the question, ‘Which is greater, adoption or justification?’. I thought it was an interesting question and definitely worth thinking through. Here is Packer’s answer:

That justification—by which we mean God’s forgiveness of the past together with his acceptance for the future—is the primary and fundamental blessing of the gospel is not in question. Justification is the primary blessing, because it meets our primary spiritual need. We all stand by nature under God’s judgment; his law condemns us; guilt gnaws at us, making us restless, miserable, and in our lucid moments afraid; we have no peace in ourselves because we have no peace with our Maker. So we need the forgiveness of our sins, and assurance of a restored relationship with God, more than we need anything else in the world; and this the gospel offers us before it offers us anything else…

But contrast this, now, with adoption. Adoption is a family idea, conceived in terms of love, and viewing God as father. In adoption, God takes us into his family and fellowship—he establishes us as his children and heirs. Closeness, affection and generosity are at the heart of the relationship. To be right with the God the judge is a great thing, but to be loved and cared for by God the Father is greater.*
———–
Note:
* J.I. Packer, Knowing God (IVP, 1993), pp. 206–207.

The Abandonment of Christian Atonement

Christians never cease to amaze me. In our contemporary ‘conversation’ we find people rejecting the idea of penal substitution, the imputation of righteousness, justification by grace alone, through faith alone, etc., etc., etc.

The thing that really bothers me about this is the arrogance with which such historic Christian doctrines are tossed aside in such a cavalier manner. We are told that these ideas of God being ‘angry’ and desiring to make his Son pay the ‘punishment’ as a ‘substitute’ to give us a ‘forensic’, ‘legal’ righteous standing before God are western, modern, and un-nuanced. We are told that for hundreds of years we’ve been reading the New Testament through the eyes of Luther, rather than first-century Judaism.

Below is an excerpt from the Epistle to Diognetus, written in the second-century AD, one of the earliest extant apologies for the Christian faith outside of the New Testament. In this section the author discusses the nature of the atonement, as taught in the New Testament. What this is an attempt to show is that the abandonement of penal substitutionary atonement which accomplishes justification (including the imputation of righteousness) by grace alone through faith alone is not just an abandonment of modern, western Christianity, but is an abandonment of historic, biblical Christianity at its very core.

But when our iniquity was fulfilled and it had been made fully manifest that its reward of punishment and death was awaited, and the season came which God had appointed to manifest henceforth His own goodness and power (O the exceeding kindness and love of God!), He did not hate us or repel us or remember our misdeeds, but was long-suffering, bore with us, Himself in mercy took on Him our sins, Himself gave up His own Son as a ransom for us, the holy One for the wicked, the innocent for the guilty, “the just for the unjust”, the incorruptible for the corruptible, the immortal for mortals. For what else could cover our sins but his righteousness? In whom was it possible for us, wicked and impious as we were, to be justified, except in the Son of God alone? O the sweet exchange, O work of God beyond all searching out, O blessings past our expectation, that the wickedness of many should be hidden in one righteous Man and the righteousness of the One should justify many wicked!

— Taken from The Epistle to Diognetus, IX.2-5. The is one of the earliest extant apologies for the Christian faith, written in the second century ad, within decades of the death of the apostle John.