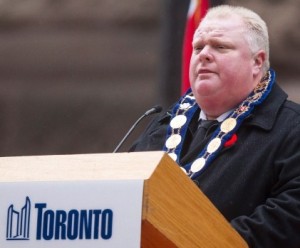 But you know what’s missing in both of those responses? Jesus’ response.

The Response of Jesus

When the woman caught in adultery (John 7.53-8.11) was brought to Jesus, he used the opportunity to remind the crowd that they were no different. The church in Toronto, however, has failed to do that because frankly, it seems that we’ve forgotten that we’re no different. And if we see ourselves as fundamentally different or better than Rob Ford in any way, we’ve lost the opportunity to speak the voice and the heart of Jesus to our city in this moment.

When Christians cry out for justice, when we mock and belittle, when we post videos of the man’s sin and humiliation — forgetting that he is equal parts rebel and lost, tormented soul, in need of a merciful Saviour — we’ve lost our chance to speak with brokenness and passion to a city that has finally come face to face with something it is actually willing to call sin.

Here’s what I mean. If Rob Ford were brought before Jesus in the midst of the church and asked what we should do with him, I suggest that he’d say, ‘You who are without sin, cast the first stone.’

Would You Cast It?

Maybe others would still be willing. After all, this man is different than the average citizen: he was appointed to the office to represent the people of Toronto! Ought he not to have handled himself with more class and dignity and propriety and restraint? But then they’d remember that we were created in the image of Almighty God, to represent him (Gen 1.26-27). And as much as they’ve been created and appointed for that purpose, they’ve spent their lives misrepresenting the one they are supposed to display with dignity. And isn’t it more important to represent the God of the Universe than the people of Toronto? And then they too would lay down their stones, because they’re no different.

You’ve read the articles, seen the videos, and had the water-cooler talks about Rob Ford. But let me ask you honestly, as you consider your own life: are you willing to cast the first stone?

I long for the Christians of this city to extend love and mercy and forgiveness to our Mayor, remembering our own weakness and need of mercy, even as we are frank about the heinousness of his sin. After all, don’t you think that the light of the gospel-mercy of Jesus might shine brightly into our Mayor’s dark world that is increasingly filled with the darkness of condemnation?

What if it was the ‘judgemental evangelical Christians’ who actually reached out to Mayor Ford as a real person in need of love right now? What if it was our response to him as a person first and a politician second that showed him (and the world) the scandalous nature of the love and mercy of Christ?

My prayer is that because of the love of Christians, our Mayor would hear the words: ‘Man, where are they? Has no one condemned you? Neither do I condemn you; go, and from now on, sin no more.’