The Greatness of a Man 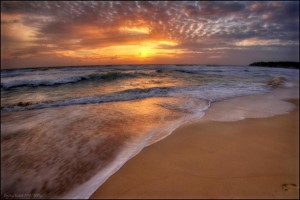 Waves on the Shore

Just before my thirtieth birthday, I walked down to the beach by our house and ended up contemplating my life (I’m hopelessly introspective). I began to think: What have I done with my life? Am I successful? Am I a failure? Will anyone ever know my name? Does it even matter an iota? What will be my lasting mark on this world? My wife? My children? What will I be remembered for?

Sometimes I long to be great. I’m not sure why.  I’m pretty darn certain I’d do a really bad job at being ‘great.’ But on this night I got thinking about greatness, and what is the significance of being a ‘great man.’

As I once heard someone say, ‘Even the greatest of men is still a man at his greatest.’ That seems about right if I think about it.

That night I watched the waves on the water rolling in on the beach. There were millions of them. Tiny, little ripples, barely noticeable from any distance. They were rolling every which way, and there were more of these than any other kind. Then there were the big breakers. It was a pretty calm night, so these were rolling in slowly. Each one came roaring in, full of froth and everything impressive. But then each one died on the shore, and rolled back, absorbed by the giant lake from which it came. The same lake from which every wave came. And when it was gone, the next one was there; the first was easily replaced and quickly forgotten. Even the sand that the big waves moved rolled back to where it began.

That’s pretty much what it means to be a man. Some of us are ripples, some are breakers, but all are here for a time, then gone. Easily replaced, quickly forgotten.

So when it’s all said and done, and I think about ‘greatness,’ I’m pretty sure greatness is not something I’d ever want. I’d much rather just learn to be faithful with little than extrapolate my failures over a long period on a big scale.

Besides, Jesus defines greatness not by popularity or impact, but by likeness to him: by humility and service without selfish ambition or conceit. And if that’s the case, then maybe the ripples who are content to be what they were created to be are really the greatest after all.