Assume I know nothing…

… and you’ll probably be right!

It’s just hit me lately that a big part of mentoring is knowing what to share. This semester I’m taking a course in pastoral theology and another one on prayer. Needless to say, they’re both very straight-forward, hands-on type courses. We spend time walking through the Scriptures and the professors take time to apply the principles to our lives in very practical ways…

Basically we’re learning things that you would probably assume we could figure out. But we haven’t. Dr Haykin noted today that he can’t recall ever hearing a pastor openly questioned about his prayer life in an ordination council, or when he speaks of his call to ministry. There is great danger in assuming.

So… what did we talk about? In pastoral theology, kerux began by teaching us about how to set up and run your study, schedule your time, file your notes, etc., etc. In prayer, we talked about physical posture (for one thing) and how important it is and what precedent there is for prayer-posture in Scripture.

Things like this seem so mundane that they generally don’t get taught. I can’t remember ever hearing someone say that their mentor sat with them and talked about how to setup a day-timer and how to make it effective. These are things that take 10 minutes to learn about from someone else, or 10 years to figure out on your own (with who knows how many dumb mistakes along the way).

And then there’s sex. Now that’s something you’d think people would know about, but as Tim Challies has pointed out recently (see Tim’s comments after the post) even in our sex-crazed society, there is still much godly, practical wisdom that needs to be passed on in our churches if we are to glorify Christ by delighting in God-pleasing sex.

So… what’s the point? When you’re mentoring, think about the things you’d never think to talk about. Don’t be afraid to go over the mundane things that you figured out on your own… these are often the most valuable, practical lessons that can be learned in a mentoring relationship. And if you’re the one being mentored, just keep your eyes open. Learn to watch carefully so you’ll pick up from osmosis things that no-one would ever think to stop and teach.

Having Dr Haykin as a professor this semester has had me reading ancient church documents I never knew existed. One resource that has been incredibly helpful to me has be the Christian Classics Ethereal Library. Until this semester, I never knew this site existed, but now I visit it quite regularly. Just check out this page for a listing of some of the classics that they’ve got available for you to read online.

I know some people aren’t too big on reading stuff online, but personally, I prefer reading online to buying everything I have to read. Especially when you consider that a little volume like Augustine’s Against the Pelagians IV can run upwards of $50 in our bookstore.

Anyway, I thought this was useful, so I’m passing it along for whatever it’s worth. Enjoy!

I believe in the Holy Trinity–Part 4

In the spirit of the Christmas, and in the footsteps of kerux’s post, I thought it might be nice to post a Christmas hymn I found in an old Presbyterian hymnal that I have not seen elsewhere.

The words are written by Aurelius Clemens Prudentius (348-413AD). You can ask Dr. Haykin who he is, because I have no idea.

Either way, this is a great hymn in the Trinitarian tradition. Either way, I think it is important to realize that when we celebrate the coming of Christ, we celebrate the incarnation of God himself, and that it is a work and a revelation of the entire Trinity, and we should be all the more in awe of the whole Godhead, not just focusing on Christ alone.

“We beheld His glory, the glory of the only begotten of the Father.”

Of the Father’s love begotten
Ere the worlds began to be,
He is Alpha and Omega,
He the source, the ending He,
Of the things that are, that have been,
And that future years shall see,
Evermore and evermore.

This is He Whom heav’n taught singers
Sang of old with one accord,
Whom the scriptures of the prophets
Promised in their faithful word;
Now He shines, the long-expected;
Let creaition praise its Lord,
Evermore and evermore.

O ye heights of heaven, adore Him;
Angel hosts, His praises sing;
All dominions, bow before Him,
And extol our God and King;
Let no tongue on earth be silent,
Every voice in concert ring,
Evermore and evermore.

Christ, to Thee, with God the Father,
And, O Holy Ghost, to Thee,
Hymn, and chant, and high thanksgiving,
And unwearied praises be,
Honour, glory, and dominion,
And eternal victory,
Evermore and evermore.

I believe in the Holy Trinity–Part 2 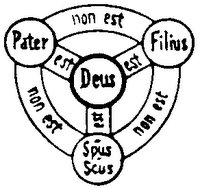 The Trinity is a hard concept to get your mind around. There’s no doubt about that. I’ve observed that one of the more difficult problems regarding the issue of the Trinity in the average Christian’s life is not that they don’t understand it, but that they see no practical use for it. “Why should I spend my time thinking about something that I’ll never get anyway? What practical relevance does it have?”

In our pragmatic society, where time is money and people are far too often too goal(purpose?)-driven to spend any time in meditation, prayer, or contemplation, this simple question is often enough to drive them away from ever considering the Trinity.

So… does the Trinity have any relevance? It sure did to the apostle Paul. As Dr. Haykin pointed out last Sunday night (see this site for the message, which we be available for download shortly), the Trinity is everywhere assumed in the New Testament, though never argued for at length.

The interesting thing about that realization is that you begin to see that everywhere the Trinity is discussed in the New Testament, it is discussed for very practical reasons (ie. “here we can see the whole fullness of the three working together as one”). In other words, you don’t mention something that’s assumed unless it has some sort of practical import: either to evoke wonder, worship, and awe, or service and thanksgiving.

The challenge to us, then, as student of God’s Word, is to notice all the times we see the Trinity discussed in the New Testament and then ask specifically: What difference does this make in my life? What response to the Trinity does the author want me to have?

I believe in the Holy Trinity

Dr. Michael Haykin was at our church on this Sunday evening, preaching on the Trinity. His text was

The message is a much needed one in today’s church where the Trinity is often assumed, seldom taught. One cannot wonder how long such an essential doctrine as this can go on not being taught, but still being unquestioned. If we, as evangelicals, can learn from the past at all, we should learn that doctrine does not remain pure without being carefully guarded. And such a core doctrine as the nature and identity of our God must be protected at all costs.

By way of introduction, Dr. Haykin walked us through several New Testament passages which speak of God existing as Three-in-One, so as to show that Matt 5.19 is not simply a proof-text.

The first passage examined was Hebrews 9.11-14. It says that Christ’s offering had secured eternal redemption. “For if the sprinkling of defiled persons with the blood of goats and bulls and with the ashes of a heifer sanctifies for the purification of the flesh, how much more will the blood of Christ, who through the eternal Spirit offered himself without blemish to God, purify our conscience from dead works to serve the living God.”

Thus, the cross is primarily and act of God, within himself. When the writer of Hebrews thinks about the economy of salvation, it is an act of God with reference to himself first and foremost. Only then does it apply to sinners like you and me. Interesting. That doesn’t seem to line up with a lot of the “me-centred” church-life we tend to find in North America these days.

Lord willing, more reflections on the Trinity will follow.

Ever feel like you don’t quite measure up? Recently, in Dr. Haykin’s lectures at school, I’ve been overwhelmed by the reality of the nature of the trinity. It is incredible to me how a doctrine like this could be so incredibly central to everything that we believe, and yet, the average Christian knows so little about it.

Perhaps it’s partially because of the cultural mindset that says, “I like the spiritual thoughts and ideas that I come up with.” Or the other attitude, “I can’t understand it, so I don’t want to deal with it.”

But we’re talking about the very nature of God here… this is not something that you can take or leave and it has no consequence. We must (in Luther’s words) “beat importunately upon” the Bible at all places where it speaks of God, so that we might better understand him.

To that end, Dr. Haykin will be coming to preach at our church in the evening on Nov. 27, on the trinity. No matter how much we want to say “I’m not a theologian, just an everyday Christian,” these are things we need to stretch ourselves to understand.

In the end, however, we recognize that “The secret things belong to the Lord our God” and that we must be content with that. We seek to understand the revelation that we have, but in humility, we never to speculate. As someone (I forget who) has said, with regard to the trinity, “Try to explain it, and you’ll lose your mind; But try to deny it, and you’ll lose your soul.”

Perhaps most appropriately, Spurgeon himself said (of the phrase “today I have begotten thee,” from Psalm 2), “If this

refers to the Godhead of our Lord, let us not attempt to fathom it, for it is a great truth, a truth reverently to be received, but not irreverently to be scanned. It may be added, that if this relates to the Begotten One in his human nature, we must here also rejoice in the mystery, but not attempt to violate its sanctity by intrusive prying into the secrets of the Eternal God. The things which are revealed are enough, without venturing into vain speculations. In attempting to define the Trinity, or unveil the essence of Divinity, many men have lost themselves: here great ships have foundered. What have we to do in such a sea with our frail skiffs?”