The Guy I Don’t Want to Be

There are lots of things I don’t want to be. Right near the top of the list is stupid. I definitely don’t want to be stupid. Whatever it takes to avoid being the stupid guy, I want to learn that and be that.

Proverbs 12.1 tells us who the ‘stupid’ guy is, from a biblical perspective. It says ‘Whoever loves discipline loves knowledge, but he who hates reproof is stupid.’

I think there are at least a few ways that you can be biblically stupid, in keeping with this verse. I’ll try to tease a few of them out.

One way you can hate reproof is by fighting back against it. If someone corrects you, you resort to pointing out the log in his eye, you draw attention to her hypocrisy, or maybe you accuse them of having impure motives in bringing that correction to you. Either way, you’re hating reproof by turning the attention away from the reproof on to something else. That’s one way to be stupid.

2. Believe You Are Superior

Another way, though, that I think is far more subtle–and perhaps more common in our circles–is to politely receive the reproof (outwardly), while all the while thinking to yourself how ridiculous it is. We smile outwardly and in the best impression of feigned humility we can muster we thank the person for their reproof. But in our minds we think, ‘I’m actually far superior to this person spiritually–how dare she think she (of all people!) is qualified to bring me reproof!’ And then we go on our way, unchanged, not heeding the reproof. That’s another way to hate it… and to be stupid. 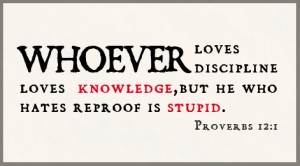 But there’s a third way to be stupid and hate reproof as well. Recently I was confronted with this reality in my own life from a number of years ago. Some friends from college that I haven’t seen in years reflected to me something of how I was perceived by others in school. I had no idea. To use CJ Mahaney’s analogy, I had cream cheese on my face and everyone saw it except for me (explanation here, third paragraph). The way I was displaying my stupidity, and my hatred of reproof, was simply by living my day-to-day life in a way that says to any and every onlooker, ‘I’ve got my act together and I don’t need your input, thanks.’ That’s stupidity in action.

That’s the guy I don’t want to be, but still the guy I’m so prone to be. Because I don’t want to be stupid, I try to appear like I’ve got it together. But in projecting the vibe that ‘I don’t need help,’ I hate reproof–and I actually become stupid.

How to Not Be That Guy

So what are some ways we can make sure we’re not becoming that guy? I’m not too sure. I’m still very much trying to figure this out myself. But here’s a starter list. Feel free to add your suggestions!

Do you have any other suggestions? How else can I learn to not be that guy?