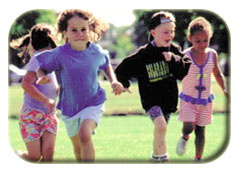 Another reason why I love our church is that there are so many children. Kids are great–so much fun. But sometimes they get me thinking…

Like the other day when I was sitting down (because I was tired) watching the kids. Some of them were playing actual games with each other, and some were trying to make their own games up. The boys were having sword fights with imaginary swords and the girls were running around giggling about something or other. Then there were a few others who were running…

They would run from one wall of the gym to the other… and then back again. Each time they would slam into the wall, laugh, and then run again. 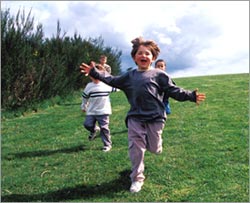 Remember when running used to be fun? I remember thinking, “I hate all this sitting, let’s get up and play a game” which would always involve running. Sometimes my friends and I would race each other as a game. That was fun.

Now, there’s not much short of the hose busting off the back of our dishwasher mid-cycle and flooding our apartment that can get me to run. Sometimes even when we’re playing floor-hockey at our men’s meetings, I see the ball and I actually think, “Is this worth running right now?” Am I the only one? Maybe that’s why people don’t like having me on their team?

My, how far I’ve fallen.