Only because I couldn’t refrain… 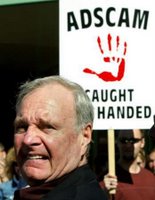 Normally I leave the political blogging up to people like my friends Shameer, tomgee, or Ian, who know what they’re talking about. Tonight I couldn’t resist, though. Paul Martin (not to be confused with Paul W. Martin) is a dangerous, dangerous man.

While watching the leaders’ debate tonight, one issue that stuck out to me in particular was the issue of the charter and the notwithstanding clause. Now, come down wherever you will on the issue of whether or not marriage is a “right” that can be defined by anyone, the notwithstanding clause is of fundamental importance when it comes to our democracy. The ones making the decisions on the legislation and governance of this country must be elected officials in order for there to be any semblence of accountability (not that we’ve had that recently either though).

If the final decision on issues of morality lies always in the hands of appointed judges and courts rather than elected officials, what hope is there for the people to ever change their country? All other issues aside, I think it is absolutely essential to vote Conservative this election, if for no other reason than to protect the ability of the people to determine the morals and standards that our country should be ruled by. To vote in the Liberals again is to chart a very dangerous course for our country’s future.

If we, as Christians, don’t demand accountability for the moral decisions of our leadership… who do we think will??