So it turns out that even first thing on a Monday morning, there is still the sound of great winds coming from the jetport. It never ends.

But because he was so kind as to post this picture (a bruise… hmmm… has anyone else ever had a bruise?), I thought I would post an update as well. (Ken and David asked for me to post updates too, so in deference to them…) 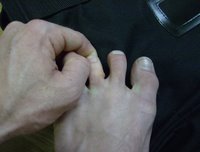 As if anyone could suggest that a little bruise is worse than POISON IVY BETWEEN YOUR TOES!!