The Sufficiency & Centrality of the Gospel 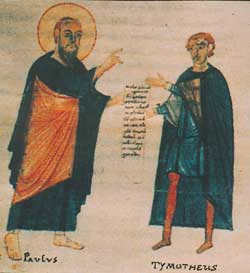 The biggest change in my theological worldview has been an increasing awareness of the expansiveness of the gospel and its ultimate sufficiency. But rather than reflecting here on being gospel-centred (there are lots of other places you can read about that), I thought I would simply identify a few of the key events God has used to help me realize the ongoing significance and relevance of the gospel for all of life.

The keynote messages preach by Mike Bullmore were especially used of God to help me see the sufficiency of the gospel for all of life.

Preaching through the book of 1 Timothy taught me to see just how ‘gospel-centred’ the apostle Paul was in his approach to pastoring. Throughout the book he insists that Timothy protect the right doctrine of the gospel of Jesus because it alone is what changes lives. No matter what pastoral problems the Ephesian church was facing, Timothy’s charge was one and the same: protect the gospel, because that’s why the church is there, that’s what saves sinners and teaches them how to live in a way that is pleasing to God.

One of the incalculable blessings of being in a church where more than one pastor preaches is the blessing of sitting under the ministry of another man as he teaches the word. For the 13 years or so before planting GFC I sat under the ministry of Pastor Paul Martin. While there are many things which mark his ministry, none is more prominent in my view than this: he is a man faithful to preach the word. What the word says, he says. The effect of sitting under that week-by-week, month-by-month, year-by-year can only be known in eternity. But over the last few years in particular, I have been profoundly affected by the bigness and the omnipracticality of the gospel as Paul preaches. I hope, by God’s grace, to be able to replicate that for our people in our church plant.

I pray that this trajectory of growth in understanding the gospel in new and dynamic ways through all of Scripture will continue. I also pray that my ministry will continue to grow, like the apostle Paul’s, to be one that is rooted and grounded in the gospel. The truth of the good news of what God has done for us in Christ must be the guiding principle for all my decisions, words, and actions as a pastor.

Why I Can’t Wait to Learn from Mike Bullmore

The Toronto Pastors Conference is only days away… if you’re not coming, you’ll be missing out!

When we were planning the conference and we first invited Mike Bullmore to come I thought to myself ‘A lot of people probably won’t know who Mike Bullmore is. So how can we fix that?’

One step we took was to ask a few friends for recommendations and endorsements of Mike. We asked last year’s conference speaker, Mark Dever, along with pastor Joshua Harris and professor, speaker, and leader of the Gospel Coalition, Don Carson. Here’s what each of them had to say about we should listen carefully to Mike Bullmore:

Don Carson said: “Mike Bullmore is not as well known as some because he has written relatively little — but he is one of the most engaging, penetrating, insightful preachers I know. Moreover, the quality of his mentoring of young men in the church he serves is simply stellar.”

Joshua Harris wrote: “Mike Bullmore is one of the best kept secrets in the larger body of Christ today. He is a masterful, passionate, precise teacher of God’s word. I’ve described him as a cross between John Piper and CJ Mahaney. And I can’t think of a higher compliment to pay a preacher.”

Mark Dever told us: “Mike Bullmore is a pastor who has both been instrumental in beginning a new congregation, and has faithfully pastored a congregation for years. He’s not only taught preaching in the classroom, but he’s mentored young preachers and pastors for years. I’m excited that pastors in Toronto will get the opportunity to enjoy Mike’s humble wisdom and his careful, encouraging preaching.”

To all that I simply say, that is why I can’t wait to learn from Mike Bullmore! Make sure you register now if you haven’t yet!

What Happens When Churches Lose the Centrality of the Gospel?

T-minus five days to go until TPC 2010! Make sure you register now — you won’t want to miss out!

Mike Bullmore is the keynote speaker this year. In this next video of our interview with him, we asked him, ‘What happens when the gospel is not at the centre in the local church?’

I can’t believe that the Toronto Pastors Conference is less than a week away!

Just to whet your appetite for some great time in the word (and some incentive to come if you haven’t decided yet!), here is a great compilation of resources to recommend and to pass along for pastors and those training for ministry.

Now you can download all 8 messages (all pdfs and mp3s with Q&A sessions included)  from the 2009 -2010 Toronto Pastors Fellowship monthly meetings in a single click! 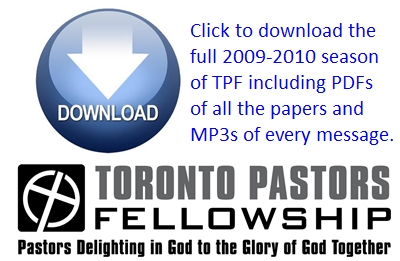 So go ahead and download those messages as you get ready for TPC 2010 coming next week!

Mike Bullmore: Why the Lord’s Supper?

Mike Bullmore is the keynote speaker at this year’s Toronto Pastors Conference coming up on June 14-16. Having just heard Mike preach at the Gospel Coalition Conference in Hamilton, I’m really looking forward to hearing my brother bring the word again.

Here are some of his thoughts on the Lord’s Supper.

For more information on the Toronto Pastors Conference or to register online, check out http://TorontoPastors.org/tpc.

What is the Role of Discipleship in the Local Church?

Mike Bullmore is the keynote speaker for this year’s Toronto Pastors Conference coming up June 14-16. I can’t wait to meet the brother in person!

To find out more about the Toronto Pastors Conference, check out TorontoPastors.org/tpc.

While the TPF page has a media library where you can download all the free sermons and papers for pastors, it can at times be cumbersome to have to download so many files. So I thought I’d put them all in one place for you.

Now, just download the zip file below, open it up and you’ve got MP3 files of all the messages + the Q&A sessions, all the PDFs of the papers, and all the PDF files of all the book reviews that were distributed this year. All in all, it’s a phenomenal resource.

With messages from men like Dr Michael Haykin, Dr Pierre Constant, Dr Darryl Dash, Pastors Tim Kerr, Carl Muller, Stephen Kring, and Paul Martin, and über-blogger extraordinaire, Tim Challies, this is great link to pass along to any pastor friends you may have.