Want to Help Your Pastor Preach?

Many of you earnestly desire to hear your pastors preach better sermons. While you can tell that he labours away, you long for more passion, more earnestness, more deliberateness, or more clarity. That’s understandable. Most preachers would like to grow in these ways as well. (And the ones who don’t really need prayer.)

One of the best ways you can help your pastor’s preaching is by praying for him. But did you know you can do even more than that? And it’s not that difficult, either.

END_OF_DOCUMENT_TOKEN_TO_BE_REPLACED

Is Your Jesus This Awesome?

This week someone sent me the following two excerpts from Spurgeon. My heart was blessed! 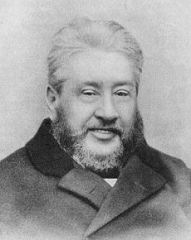 The combined effect was to freshly wow me with the wonderful thought of the bigness,  awesomeness, and merciful kindness of Jesus. I pray to God that as I grow as a Christian I would grow even more in more wonder, awe, and love for Christ.

I want to be captivated by his majesty and his intimacy, his fellowship and his forgiveness, his goodness and his glory.

What about you? Is your Jesus this awesome?

See how red your guilt is. Mark the scarlet stain. If you were to wash your soul in the Atlantic Ocean, you might incarnadine every wave that washes all its shores, and yet the crimson spots of your transgression would still remain. But plunge into the “fountain filled with blood, drawn from Immanuel’s veins,” and in an instant you are whiter than snow. Every speck, spot, and stain of sin is gone, and gone forever.

I bear my testimony that there is no joy to be found in all this world like that of sweet communion with Christ. I would barter all else there is of heaven for that. Indeed, that is heaven. As for the harps of gold and the streets like clear glass and the songs of seraphs and the shouts of the redeemed, one could very well give all these up, counting them as a drop in a bucket, if we might forever live in fellowship and communion with Jesus.

We Value What Costs Us

This week at GFC is our Winter Week of Prayer. My buddy Joshua taught us about why prayer matters last night to kick us off, and now we’ve got special prayer meetings planned for each day of the week. I love gathering with God’s people to pray!

One thing I’ve learned about prayer already this week is a lesson I learned about life around the time I got my first job: You value something more when it costs you something to obtain it.

The summer I turned 17 I worked my first full-time job for $7.50 per hour (or something like that). I couldn’t afford much, but what I could afford I cherished; I knew how hard I had to work to get that money! For the first time, I really understood what it meant to have to work for something that I wanted.

This reality is true about prayer too. And, of course, no one puts it better than Spurgeon. Here he compares Jacob’s wrestling with God to the Christian’s prayer life.

Now, when the church begins to pray, it may be at first that the Lord will act as though He would go further (see Luke 24.28), and we may fear that no answer will be given. Hold on, dear friends. ‘Be steadfast, immovable’ (1 Cor 15.58), despite all. By and by, it may be, there will come discouragements where we looked for a flowing success. We will find friends hindering; some will be slumbering and others sinning. Backsliders and impenitent souls will abound. But let us not be turned aside. Let us be all the more eager.

And if it should happen that we ourselves become distressed and de-spirited, and we feel we never were so weak as we are now, never mind friends; still hold on. For when the sinew is shrunk, the victory is near. Grasp with a tighter grip than ever. Let this be our resolution: ‘I will not let you go, until you bless me.’ Remember, the longer the blessing is in coming, the richer it will be when it arrives. That which is gained speedily by a single prayer is sometimes only a second-rate blessing; but that which is gained after many a desperate tug, and many an awful struggle, is a full-weighted and precious blessing.

The children of persistence are always fair to look upon. The blessing that costs us the most prayer will be worth the most. Only let us be persevering in supplication, and we will gain a broad, far-reaching blessing for ourselves, the churches, and the world.

Here is grand encouragement for us to pray! We know the Father loves to give good gifts to his children who ask, seek, and knock (Matt 7.7-11), and we know that we will be changed and conformed to his image as we ask. Now we also know that in the struggle to attain the blessing we will grow in our appreciation for the blessing itself.

The Worship of a Sinful Woman

And behold, a woman of the city, who was a sinner, when she learned that he was reclining at table in the Pharisee’s house, brought an alabaster flask of ointment, and standing behind him at his feet, weeping, she began to wet his feet with her tears and wiped them with the hair of her head and kissed his feet and anointed them with the ointment.

Recently, at GFC, Paul preached on the incident of Mary’s anointing of Jesus with the expensive perfume. Spurgeon argues vehemently that these are two separate incidents. I completely agree. He comments:

But it ought not to astonish you that there were two persons whose intense affection thus displayed itself; the astonishment should rather be that there were not two hundred who did so.

What both these incidents have in common is that they are oth lavish and extravagant displays of love for Christ, devotion to Christ, and affection for Christ. They are both displays of worship, in public, which are extremely personal and emotion-filled. Those are all things that are challenging for me!

Could it be that this ‘sinful woman’ from Luke 7 has much to teach me about worship? Absolutely! Here’s more from Spurgeon:

The woman’s service showed her love in that it was fervent. There was so much affection in it–nothing conventional; no following chilly propriety, no hesitating enquiry for precedents. Why did she kiss his feet? Was it not a superfluity? What was the good of it? Did it not look sentimental, affected, sensuous, indelicate? Little did she care how it looked; she knew what she meant. She could not do otherwise. Her whole soul went out in love, she acted naturally as her heart dictated, and, brethren, she acted well. O for more of this guileless piety, which hurls decorum and regulation to the winds.

Her act of worship was passionate, affectionate, non-conventional, not hindered by propriety (slang for man-fearing). It was superfluous–which was exactly the point.

Her worship was genuine. Her love for Jesus demanded response, and she gave it. O for love and worship like this! How I wish I was more like that ‘sinner’ of a woman!

What Spurgeon Thought about Christmas

I find very few people funnier than CH Spurgeon. When delivering a sermon on December 23, 1855, Spurgeon opened (what would you get in your homiletics class if you used this as an introduction?) with these words:

This is the season of the year when, whether we wish it or not, we are compelled to think of the birth of Christ. I hold it to be one of the greatest absurdities under heaven to think that there is any religion in keeping Christmas-day. There are no probabilities whatever that our Saviour Jesus Christ was born on that day, and the observance of it is purely of Popish origin; doubtless those who are Catholics have a right to hallow it, but I do not see how consistent Protestants can account it in the least sacred. However, I wish there were ten or a dozen Christmas-days in the year; for there is work enough in the world, and a little more rest would not hurt labouring people. Christmas-day is really a boon to us; particularly as it enables us to assemble round the family hearth and meet our friends once more. Still, although we do not fall exactly in the track of other people, I see no harm in thinking of the incarnation and birth of the Lord Jesus…

With that he began his sermon on the incarnation of Jesus. Awesome!

Good old C.H. Spurgeon had these words to share as he commented on Ps 119.15:

We ought to muse upon the things of God, because we thus get the real nutriment out of them. Truth is something like the cluster of the vine: if we would have wine from it, we must bruise it; we must press and squeeze it many times. The bruiser’s feet must come down joyfully upon the bunches, or else the juice will not flow; and they must well tread the grapes, or else much of the precious liquid will be wasted. So we must, by meditation, tread the clusters of truth, if we would get the wine of consolation therefrom. Our bodies are not supported by merely taking food into the mouth, but the process which really supplies the muscle, and the nerve, and the sinew, and the bone, is the process of digestion. It is by digestion that the outward food becomes assimilated with the inner life. Our souls are not nourished merely by listening awhile to this, and then to that, and then to the other part of divine truth. Hearing, reading, marking, and learning, all require inwardly digesting to complete their usefulness, and the inward digesting of the truth lies for the most part in meditating upon it. Why is it that some Christians, although they hear many sermons, make but slow advances in the divine life? Because they neglect their closets, and do not thoughtfully meditate on God’s Word. They love the wheat, but they do not grind it; they would have the corn, but they will not go forth into the fields to gather it; the fruit hangs upon the tree, but they will not pluck it; the water flows at their feet, but they will not stoop to drink it. From such folly deliver us, O Lord, and be this our resolve this morning, “I will meditate in thy precepts.”

In our day it is trendy to be busy. We think we’re important if we’re the busiest person in any crowd, always in a rush to get on to the next thing. May God give his people grace to make the time to meditate on his word, making it always our priority.