A Sad Sort of Irony

Here’s a post that a few of you may remember. I posted it a while back on my old blog. I read it today though, and thought it might be worth revisiting. So here it is, with a few minor revisions.

Isn’t it interesting how God weaves themes together in the things we’re learning at given points in our life? At church my pastor has been preaching through Romans. In my biblical counselling course at school we’ve had to take a pretty in-depth look at Romans as well, along with Genesis 1-3.

Examining the ways of the heart of man and the origin of sin from those two books has been a fascinating study. Today I was reflecting on all that the Word of God has been teaching me and I couldn’t help but take notice of the wisdom of God together with the depravity of man in a sad sort of irony.

God created man noble and ‘very good.’ The world was created for his enjoyment, and enjoy it he did! Moreover, he treasured the wife of his youth–the woman God created from him, to be for him–flesh of his own flesh. They were naked–completely exposed, vulnerable, shown for all that they truly were–and they felt no shame. 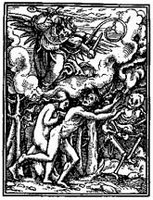 But you know the story… along comes that crafty old serpent to mess everything up. He tempts the humans by saying that what they were wasn’t enough… they could be more. They should strive to know more and to be more. Though they had no sin or shame, he tempted them with pride, and they bought it.

They wanted to be what God was, to know what God knew… they had the commands of God, but thought, “We know better.” That was pride, and it did them in.

But where did pride lead?

Ever since then humans have been shame-driven creatures. Ever wonder what stops us from really getting close to other humans? We’re afraid they might get to know us. What stops us from confessing that we’re sinners? We don’t even want to admit to ourselves that we’re as sinful as we are, nevermind confessing it to someone else, or to God.

So we help each other out in this journey of deception by telling each other that what we really need is ‘self-confidence,’ which is in reality a justified pride. ‘Think good thoughts about yourself everyday,’ we say. The ‘little engine that could’ is somehow seen as a positive role model. The basic premise of course, is that there is something good inside of me that I should believe in… but there’s not. But we continually tell ourselves and each other that there is so that we can feel better about ourselves; we minimize the pain of our shame through pride.

Shame moves us to distract people from our real selves. We become someone we were never meant to be: we put on facades, we pretend we like things we don’t, we hang out with people we don’t like and we do things we never would, all so that no one will judge us for being who we really are, because we’re ashamed of who we really are.

Shame moves us to ambition. We pursue things we don’t want at costs higher than what we would like to pay just so we don’t look worse than anyone else… we cover our shame with pride. ‘Don’t fall behind or someone may figure out that you don’t measure up,’ we tell ourselves.

Shame moves us to religion. All the world religions continue to insist that if we work hard to do good, and if we just live like the good people we really are, whatever creator-being there is will be good to us as well. That’s pride… it’s not an honest evaluation of what’s in my heart. But that’s the wisdom of this world; the ‘wisdom’ God saw, when he said ‘I will destroy the wisdom of the wise, and the discernment of the discerning I will thwart.’

How is it that Adam’s sin of pride led to shame for all mankind, only to have that shame end up resulting in pride? It pushes us further and further away from the God who said that he ‘opposes the proud, but gives grace to the humble.’

In other words, acknowledge your shame. Say, ‘Yeah, when I look inside my heart I see that I don’t desire what God desires, I only want what I want.’ Humble yourself before God and say, ‘God, I’m not all you’ve made me to be and I need your grace to change my heart.’ But that takes humility.

Remarkably, however, in the wisdom of God, that humility (the undoing of pride) is the first thing required for entrance into God’s eternal kingdom. That’s definitely not the ‘wisdom’ of man.