Yesterday we had our December meeting of the Toronto Pastors Fellowship. What a blessing it was!

Pastor Tim Kerr of Sovereign Grace Church Toronto gave us a presentation titled, ‘Pastor, Love Your Wife!’ It was an excellent message. It was theological, cross-centred, and ultimately practical.

While the paper itself was good, the presentation of it was even better. Tim’s elaboration of the details in the paper were excellent, as were his answers in the question & answer time.

This month at TPF was a special one for several reasons. We invited all the men to bring their wives this month (who are always welcome, but especially so this month). Then after the meeting we all went out for lunch at a local restaurant. What a great time together!

Even though the paper was geared directly towards pastors and their wives, any married person would benefit from Tim’s ministry. You can download the paper here or you can get the audio here.

If you know of a pastor within driving distance to the Greater Toronto Area, please let him know about the Pastors Fellowship. It has been a blessing to me, and I’m sure it will be to him as well.

One of the things I’m super-excited to be involved with this Autumn is the Toronto Pastors Fellowship. It’s a ministry to pastors of various denominations in and around the GTA.

We’ll be meeting monthly for the presentation of a paper geared at admonishing and encouraging pastors. After the paper there will be refreshments, then a Q&A session. The whole thing is designed to increase and enhance the fellowship that pastors in our area are able to have with other pastors.

I think I can say without bias (although I did have input into how it was put together) that this year’s lineup of speakers looks phenomenal; as do the topics they’ll be speaking on.

One of my favourite things in life is getting stuff for free (and I get the impression I’m not the only pastor like that). Thanks to the amazingly gracious offer of Sovereign Grace Ministries, we’ll be able to give away free stuff to all the pastors who come to the first few meetings! And it’s not just any stuff… it’s great stuff that I would love to get my own hands on!

We’re hoping to have a website set up very shortly for the Pastors Fellowship, and it will have all the lowdown on speakers, as well as the papers which will be downloadable in audio or in written form. I’ll write more about it then, and link to it as well.

In the meantime, I’ll post a sneak peak of the schedule that we’ll be running, Lord willing, this year. 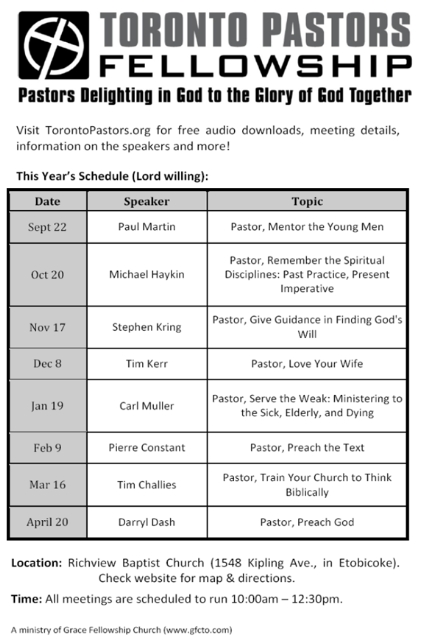 Special thanks to Josh Rivers as well for all his work on putting together a logo for us. He’s an absolute pleasure to work with!

Thinking and Feeling with God

It seems that the Psalms are the centre of much attention in evangelicalism in North America these days. The Psalms is one of my favourite books, so this is exciting to me.

It has saddened me over the years to see how many Christians are somewhat unable to understand, identify with, and apply the Psalms to their own spiritual walk. This just makes me even more glad that great preachers are spending time there these days!

Here are some valuable resources:

I’m hoping to post some more of my own thoughts on how the Psalms ought to be interpreted and applied to the hearts and lives of Christians in the next few days.

Attending WorshipGod06 (run by Bob Kauflin and Sovereign Grace Ministries) with Tim has given me lots to think about. Ever since Tim and I got back I’ve been mulling over the issues with regards to the ‘sign’ or ‘miraculous’ gifts. Here are some random thoughts I’ve been chewing on…

1. 1 Corinthians 13.8-13. This is not profound, but merely an acknowledgement of what the majority of evangelicalism has already said: these verses are not referring to the closing of the canon. Without this text, the intratextual evidence for any strong cessationist position is incredibly weak. To my knowledge this is the only text cessationists use to argue their position that Paul knew of the gifts coming to an end. Further, even if we could allow that this text is speaking of these gifts (tongues, prophecies, and knowledge), then why do we include things like the gift of healing in the list of gifts which have ceased?

2. Where do we draw the line? It seems to me that the categories of ‘miraculous’ or ‘sign’ gifts are somewhat artificially imposed on the New Testament text (like imposing the ‘moral / civil / ceremonial’ categories on the OT Law). Nowhere does it seem evident that such a distinction is made. Quite the contrary, in places like Romans 12.4-8 Paul lumps prophecy in with faith, service, teaching, exhortation, contributing, leading, acts of mercy, etc. What justification is there for picking and choosing which cease and which continue?

3. We need to know. The going line in our circles is that these are matters of secondary or tertiary importance to the gospel, and so we are united in our differences and able to fellowship with each other since we agree on the central issues. I agree with this. But I can’t help but wonder how consistent it is. If there are people prophesying by the Spirit and we are saying that they’re not, aren’t we closing our ears to God’s words to us? Aren’t we guilty of denying a genuine work of God? Or if the opposite is the case and they’re not really prophesying, but are saying they are, are they not false prophets? If they are putting false words in God’s mouth is that something we can afford to call ‘secondary’? I don’t see how. I’ve been reading through Jeremiah lately and finding that God has some very harsh declarations against those who prophesy falsely in his name…

4. ‘But they’re not the New Testament gifts…’. This was one of Tim’s (and mine as well) biggest complaints against the practising of the gifts that we saw at WorshipGod06. Simply put, what we saw did not line up with what we read in the New Testament. Now, as one who believes strongly in Sola Scriptura, I want to phrase very carefully what I say next, because I realize that variations of this thinking can be used to all kinds of nefarious ends. But as I think about the practising of the gifts described in Acts and then think about the gifts that I see today at Bible-centred places like Covenant Life Church, I have to ask, ‘so what if they’re different?’ Again, I don’t want to dismiss any biblical command or restrictions which are ongoing, but don’t we often argue that the book of Acts is more ‘descriptive’ rather than ‘prescriptive’? And if we’re honest with ourselves, how much of what takes place on a Sunday morning in our church buildings actually resembles what the first believers did as they met ‘day by day’ anyway? So why is it such a big deal with the gifts?

It seems that the more important (if one can speak in such terms) place to look for guidance on the practice of the gifts would be the epistles written to post-Acts churches. These epistles contain many instructions on how to practice the gifts in an ongoing sense and nowhere seem to indicate that they will cease. Places like Covenant Life Church, leaders like Bob Kauflin, and organizations like Sovereign Grace Ministries do seem to follow those instructions quite well. Everything is done decently and in order (more ordered, in fact, than many cessationist churches I’ve been in where no one even has an order of service written up).

Again, these are all just random thoughts not leading to any conclusions. They’re just things I’m contemplating in the spare moments my brain manages to come across.

Any thoughts are more than welcome!

My friend Tim and I are leaving this morning to attend WorshipGod06, put on by Sovereign Grace Ministries. I don’t know that I’ll be blogging at all while I’m gone, but check Tim’s blog for regular updates as he live-blogs all the goings-on.

Sing All the Verses!

I don’t know why, but for some reason over the past couple of decades it has become trendy to only sing parts of songs. It makes no sense. How can you follow any kind of flow of thought when you’re taking chunks out of the middle? You’re destroying an artist’s work and ripping the people off by not engaging their full minds in all the depth of the meanings of the songs. But I won’t go on and on about it, because Tim Challies blogged on this more ably already (see here) from some experiences he had before coming to our church.

All I’ll do here is show you one example that I just aboslutely don’t get. Most people know the song I Stand in Awe by Mark Altrogge. But here’s what blows my mind: Almost no one knows that there are two verses! Why don’t people sing the second verse? I have no idea! It’s awesome! Here are the words so you can see for yourself.

I STAND IN AWE