I’ve Got a Problem

Tomorrow I’ll know more than I do today. Or at least, I hope so.

That’s the typical pattern, right? Who of us hasn’t been horribly embarrassed by reflecting on things we did and said five years ago? Yet, at that time, it seemed like the right thing to say or do.

Sometimes I’ve wondered: ‘If twenty-years-from-now me could speak with the me-of-right-now, what would I say to myself?’ I usually think that having this kind of input from my future self would be of value.

But, sadly, I’m not so quick to extend that grace to others.

Here’s what I mean: There are Christian brothers and sisters all around me who are 20 years ahead of me already; but do I listen to them? And when they speak, do I treat their words with as much reverence as I would the words from future-me?

The Problem Played Out

Recently I’ve been listening to an excellent new album by  James Hoffman. One song in particular resonated with me over the last day (it’s the song cued up below). In the song, Hoffman is singing about the experience of holding his newborn daughter. He’s reflecting on the truth of what his mother told him: ‘Now I know what my mother meant when she said I’d never understand — fully — till I held you.’

END_OF_DOCUMENT_TOKEN_TO_BE_REPLACED

The longer I live, the more I see that balance is hard to achieve. That’s one of the (many) reasons why I need to keep coming back to Scripture again and again, repeatedly challenging my own worldview. I need to be constantly challenged to prove that what I believe about something (whether conscious or sub-conscious) is being corrected and informed by the mind of God.

One example of how I’ve been challenged lately is by thinking about beauty. As a father of three daughters, I’m responsible for thinking hard about beauty and trying to help my girls learn to value what God values.

Pendulum to the Left

In our culture, beauty, body image, being physically attractive — this is everything! Girls grow up in our day learning the fine art of taking photos of themselves constantly, always trying to make themselves look attractive.

Joe Carter posted some interesting facts on ‘female body image‘ back in April that indicate some very serious concerns about the emphasis our culture places on physical beauty:

3. By age 6, girls start to express concerns about their own weight or shape. 40-60% of elementary school girls (ages 6-12) are concerned about their weight or about becoming too fat. This concern endures through life.

4. The best-known contributor to the development of anorexia nervosa and bulimia nervosa is body dissatisfaction. The median ages for onset of an eating disorder in adolescents is 12- to 13-years-old. In the United States, 20 million women suffer from a clinically significant eating disorder at some time in their life.

5. Only four percent of women globally consider themselves beautiful.

Clearly, our culture swings the pendulum toward a view of external beauty that places far too much of a burden on girls and women in particular. Young women are being led to live and die — literally — for beauty.

Pendulum to the Right

Conservative Christians, like me, are able to discern the disproportionate value being placed on externals. We see that it doesn’t line up with God’s heart (1 Sam 16.7), so we call on each other to esteem hearts over clothes. We hear the words of the New Testament that call us to modesty of dress (1 Tim 2.9-10; 1 Pet 3.3-6; 1 Cor 12.22-24), so we call on each other to prioritize good works and good character over fashion.

And that’s all right and good.

But, there’s a tension present in Scripture that needs to pull us in from both the right and the left of the pendulum, back towards the centre.
END_OF_DOCUMENT_TOKEN_TO_BE_REPLACED

END_OF_DOCUMENT_TOKEN_TO_BE_REPLACED

Here are ten hopefully helpful principles for interpreting Wisdom Literature. It’s important that we get this right, since this is God’s means of helping us to become wise.
END_OF_DOCUMENT_TOKEN_TO_BE_REPLACED

Here are ten hopefully helpful principles for interpreting Old Testament narrative. It’s important that we get this right, since this genre of Scripture makes up about 66% of our whole Bible.
END_OF_DOCUMENT_TOKEN_TO_BE_REPLACED

Preaching through Genesis has had me spending more time thinking about the narrative structure of the Old Testament lately. Last week as I was studying to preach Genesis 20-21 it struck me again that one of the main points of the whole Old Testament is also one of the simplest:

There is no human saviour, only humans who need one.

One of the very first things God does when humans sin is announce that he has a plan to bring  a saviour, who will be born of a woman, so that right from the beginning our hopes are raised. With each new covenant and each new child miraculously born in the line of promise we’re to ask in anticipation: Is this the saviour?

But the narrative structure of the Old Testament makes it clear again and again that no human can be a sufficient saviour. Every spiritual climax soon descends into disaster and the heroics of faithful men are quickly followed by failure.

Think about the pattern:
END_OF_DOCUMENT_TOKEN_TO_BE_REPLACED

3 January, 2012 / Julian Freeman / Comments Off on Newsflash: The New Testament is Shorter 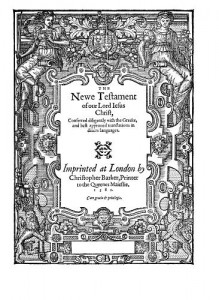