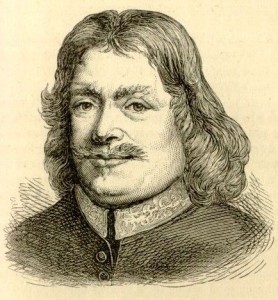 Here is a quote from John Bunyan on the Christian and the Law of Moses. It is taken from an unpublished tract found after Bunyan went to be with Jesus. It, along with two others, was apparently unfinished. I just wish that my ‘finished’ stuff was 1/10 as good as his ‘unfinished!’

I’m so thankful to God for the gifting of this ‘tinker’ (see John Owen’s quote to Charles II regarding Bunyan here).

Wherefore whenever thou who believest in Jesus, dost hear the law in its thundering and lightening fits, as if it would burn up heaven and earth; then say thou, I am freed from this law, these thunderings have nothing to do with my soul; nay even this law, while it thus thunders and roareth, it doth allow and approve of my righteousness. I know that Hagar would sometimes be domineering and high, even in Sarah’s house and against her; but this she is not to be suffered to do, nay though Sarah herself be barren; wherefore serve it (the law) also as Sarah served her, and expel her from thy house. My meaning is this, when this law with its thundering threatenings doth attempt to lay hold on thy conscience, shut it out with a promise of grace; cry, the inn is took up already, the Lord Jesus is here entertained, and there is no room for the law. Indeed if it will be content with being my informer, and so lovingly leave off to judge me; I will be content, it shall be in my sight, I will also delight therein; but otherwise, I being now upright without it, and that too with that righteousness, with which this law speaks well of and approveth; I may not, will not, cannot, dare not, make it my Savior and Judge, nor suffer it to set up its government in my conscience; for so doing I fall from grace, and Christ doth profit me nothing.

— John Bunyan, from Of the Law and A Christian

Did John Bunyan Question His Salvation?

You bet he did! Like most Christians throughout the history of the church, this famous believer was prone to discouragement. When he saw the sway that sin still held in his life he would begin to question whether or not God was really working in him–whether God would indeed keep him.

So what did he do?

Bunyan did excellently what we are so frequently admonishing each other to do: Preach truth to your own heart. A wonderful illustration of this is below.

Here, when faced with fits of despair and discouragement, Bunyan takes the truth of justification (forgiveness of sins and the imputation of Christ’s righteousness) and preaches it to his heart. Despite what he feels, he says to himself, ‘This is what is true. This is where I can find hope, comfort, and peace.’

We would all do well to learn from his example and follow in his footsteps when we are discouraged or downcast.

Sometimes I bless the Lord my soul hath had the life that now I am speaking of, not only imputed to me, but the very glory of it upon my soul; for, upon a time, when I was under many condemnings of heart, and feared, because of my sins, my soul would miss of eternal glory, methought I felt in my soul such a secret motion of this—Thy righteousness is in Heaven, together with the splendour and shining of the Spirit of Grace in my soul, which gave me to see clearly that my righteousness by which I should be justified from all that could condemn, was the Son of God Himself in His own Person, now at the right hand of His Father representing me complete before the Mercy- seat in His Ownself; so that I saw clearly that night and day, wherever I was, or whatever I was a doing, still there was my righteousness just before the eyes of Divine glory; so that the Father could never find fault with me for any insufficiency that was in my righteousness, seeing it was complete; neither could He say, Where is it? because it was continually at His right hand.

Also, at another time, having contracted guilt upon my soul, and having some distemper of body upon me, I supposed that death might now so seize upon as to take me away from among men; then, thought I, what shall I do now? is all right with my soul? Have I the right work of God on my soul? Answering myself, “No, surely”; and that because there were so many weaknesses in me; yes, so many weaknesses in my best duties. For, thought I, how can such an one as I find mercy, whose heart is so ready to evil, and so backward to that which is good, so far as it is natural. Thus musing, being filled with fear to die, these words come in upon my soul, “Being justified freely by His grace through the redemption that is in Christ Jesus” (Rom 3:24). As if God had said, Sinner, thou thinkest because that thou hast had so many infirmities and weaknesses in thy soul while thou hast been professing of Me, therefore now there can be no hopes of mercy; but be it known unto thee, that it was not anything done by thee at the first that moved Me to have mercy upon thee: neither is it anything that is done by thee now that shall make me either accept or reject thee.

Bunyan on How to Mortify Our Longings for Egypt

Here is a scene I read last night from Bunyan’s immortal Pilgrim’s Progress. In this excerpt, Christian (an allegorical figure representing a believer on his journey through life to heaven, ie. Zion) is having a conversation with a lady named Prudence. She asks him if he sometimes still longs for his home country (ie. the life he used to live). Bunyan’s insights on how to overcome indwelling sins of the mind here are priceless. Enjoy!

PRUDENCE: Do you not think sometimes of the country from whence you came?

CHRISTIAN: Yea, but with much shame and detestation. Truly, if I had been mindful of that country from whence I came out, I might have had opportunity to have returned; but now I desire a better country, that is, a heavenly one (Heb. 11:15,16).

PRUDENCE: Do you not yet bear away with you some of the things that then you were conversant withal?

CHRISTIAN: Yes, but greatly against my will; especially my inward and carnal cogitations, with which all my countrymen, as well as myself, were delighted. But now all those things are my grief; and might I but choose mine own things, I would choose never to think of those things more: but when I would be a doing that which is best, that which is worst is with me (Rom. 7:15, 21).

PRUDENCE: Do you not find sometimes as if those things were vanquished, which at other times are your perplexity?

CHRISTIAN: Yes, but that is but seldom; but they are to me golden hours in which such things happen to me.

PRUDENCE: Can you remember by what means you find your annoyances at times as if they were vanquished?

PRUDENCE: And what is it that makes you so desirous to go to Mount Zion?

CHRISTIAN: Why, there I hope to see Him alive that did hang dead on the cross; and there I hope to be rid of all those things that to this day are in me an annoyance to me: there they say there is no death, (Isa. 25:8; Rev. 21:4) and there I shall dwell with such company as I like best. For, to tell you the truth, I love Him because I was by Him eased of my burden; and I am weary of my inward sickness. I would fain be where I shall die no more, and with the company that shall continually cry, ‘Holy, holy, holy.’