On Every Page, Behind Every Line

Regardless of what age or part of the world you live in, one of the most central questions of the Christian faith is this: ‘Who is Jesus? Is he really God? Does the New Testament really teach that?’ While every orthodox believer quickly and heartily affirms that Jesus is in fact divine, many believers struggle with how exactly to prove that to friends & neighbours. 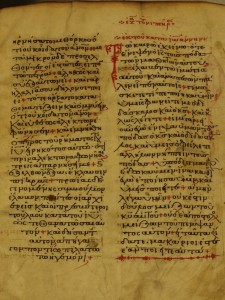 While the New Testament does at times simply refer to Jesus as God (see the list here), frankly, it can be hard sometimes for many Christians to find passages that express as clearly and succinctly as we would like that Jesus is God. That’s in large part because the writers of the New Testament simply were not writing a systematic theology. They were writing to real people with real life problems and real church problems. So what we find is that more often than not the New Testament authors are addressing life’s issues in such a way that presumes the deity of Christ, without necessarily spelling it out for us.

So it’s kind of like me writing to you about how to play hockey. I may write about learning to shoot, pass, block shots, throw body checks, win faceoffs, and maybe even skate, but all the while I might not explicitly state that ice is actually frozen water. It’s understood. It’s the basis of all that we’re doing. You can’t play hockey without ice (at least not real hockey), and you can’t live as a Christian without knowing that Jesus is God.

All that being said, on every page, behind every line, this majestic truth stands: Jesus is the promised incarnation of God, the Son of God, the one who reigns. He himself is to be worshiped and served as God, because he is God. And that truth is everywhere, upholding and undergirding everything.

Here’s one little example from the passage we studied last week at GFC (1 Pet 5.1-4). In that passage, Peter admonishes elders to ‘shepherd the flock of God that is among you’ in a way that honours and pleases God, since all will be called to account. In particular, those who shepherd in this way will ‘receive the unfading crown of glory’ at the end of all things. Why? Because they have represented the true Shepherd, the ‘chief Shepherd,’ Jesus Christ.

You can read that quickly and move on, or you can stop and ponder what it means that Peter has just called Jesus the ‘chief Shepherd’ when he thought about the ‘flock of God.’ Those images are loaded with meaning from the Old Testament.

Psalm 78.52 says that, in the Exodus, ‘[God] led out his people like sheep and guided them in the wilderness like a flock.’ As you follow the Bible’s storyline it’s not long before you get to passages like Jeremiah 23-25 and Ezekiel 9 which speak words of condemnation on those who were supposed to be shepherds of God’s people (cf. Zech 10.3). Because they failed, the flock was scattered in exile. When the prophets speak of a return from exile, notice the language that is used:

I will surely assemble all of you, O Jacob; I will gather the remnant of Israel; I will set them together like sheep in a fold, like a flock in its pasture, a noisy multitude of men. (Micah 2.12)

Like the first Exodus, this return from exile will be an expression of God’s deliverance, bringing his people, like a flock, to himself. But here’s what’s so significant: It is always Yahweh himself who will come as Shepherd. It is clear that when this great Shepherd comes to gather God’s people, it will be none other than God himself who brings the deliverance.

But you, O Bethlehem Ephrathah, who are too little to be among the clans of Judah, from you shall come forth for me one who is to be ruler in Israel, whose origin is from of old, from ancient days. Therefore he shall give them up until the time when she who is in labour has given birth; then the rest of his brothers shall return to the people of Israel. And he shall stand and shepherd his flock in the strength of the LORD, in the majesty of the name of the LORD his God. And they shall dwell secure, for now he shall be great to the ends of the earth. (Micah 5.2-4)

Go on up to a high mountain, O Zion, herald of good news; lift up your voice with strength, O Jerusalem, herald of good news; lift it up, fear not; say to the cities of Judah, “Behold your God!” Behold, the Lord GOD comes with might, and his arm rules for him; behold, his reward is with him, and his recompense before him. He will tend his flock like a shepherd; he will gather the lambs in his arms; he will carry them in his bosom, and gently lead those that are with young. (Isaiah 40:9-11)

“Hear the word of the LORD, O nations, and declare it in the coastlands far away; say, ‘He who scattered Israel will gather him, and will keep him as a shepherd keeps his flock.’ (Jer 31.10)

As a shepherd seeks out his flock when he is among his sheep that have been scattered, so will I seek out my sheep, and I will rescue them from all places where they have been scattered on a day of clouds and thick darkness. … And you are my sheep, human sheep of my pasture, and I am your God, declares the Lord GOD.” (Ezek 34.12; 31)

So behind Peter’s simple statement that the ‘chief Shepherd’ is Jesus lies a whole theology of the deity of Jesus, the Promised Divine Shepherd, the one who brings the deliverance of God’s people in the true Exodus. It’s on every page, in every line, behind every thought. Jesus is God.

Three Reasons to Have Joy in Trials

20 September, 2011 / Julian Freeman / Comments Off on Three Reasons to Have Joy in Trials 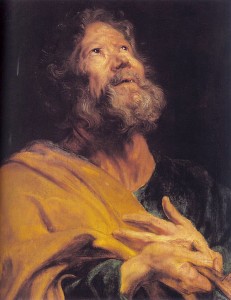 This past Sunday at GFC we began a new series in the book of 1 Peter called ‘A Holy People Living Wholly for God.’ One of the themes that’s immediately apparent in this letter is that of suffering. Peter is clearly writing to Christians whom he expects will undergo trials. The suffering for them, to this point, is not extreme or absolute. Rather, they are ‘grieved by various trials.’ Some are worse than others, all are different, none are fun.

Peter reminds them of their salvation (1 Pet 1.3-5) and tells them that in light of their salvation they can still rejoice despite undergoing hardship (1 Pet 1.6). Apart from their salvation itself (with a certain future hope of an inalienable, glorious inheritance), there are at least three reasons given by Peter why Christians can rejoice in their trials. Though many of our circumstances are different, all of his reasons still pertain to us today.

1. Whatever trials I have are necessary

These are Peter’s words: ‘In this you rejoice, though now for a little while, if necessary, you have been grieved…’. In other words, you have not been grieved by anything that is not necessary. Peter began his letter by reminding them that they had become ‘elect exiles … according to the foreknowledge of God the Father’ (1 Pet 1.1-2), indicating that all their sufferings in this life, like everything in their lives, had been ordained by their Father who loves them. Here the same holds true. Whatever a Christian suffers, it is necessary. God the Father does not discipline his children or call them to suffer on a whim. When he calls them to this it is necessary for their good, according to his wisdom.

So whatever you are suffering right now, here is one reason to have joy: God the Father, who loves you, deems it necessary. It is not meaningless, but full of purpose.

2. Whatever trials I have are for proving my faith

Sometimes we are tempted to think that my sufferings are intended to break us. Nothing could be further from the truth, though. Peter says your trials are ‘so that the tested genuineness of your faith’ may be seen (1 Pet 1.7). When God ordains trials in your life, they are not to break you, but to prove to you and to all onlookers that your faith is genuine. The trials are just the fire which refines your faith and makes it more pure. As your faith is purified it becomes even purer, more enduring, more precious.

So whatever you are suffering right now, you can remember this: even in the trials, God is proving and purifying your faith which is the very thing which guarantees your inheritance (1 Pet 1.4-5). Through trials our living hope grows stronger thus giving us even more joy.

3. Trials will result in praise, glory, and honour

The tested genuineness of our faith (while something to find joy in) is not an end in and of itself. Rather, our tested and proven faith has a result: praise, glory and honour (1 Pet 1.7).

For no one is a Jew who is merely one outwardly, nor is circumcision outward and physical. But a Jew is one inwardly, and circumcision is a matter of the heart, by the Spirit, not by the letter. His praise is not from man but from God. (Rom 2.28-29)

Therefore do not pronounce judgement before the time, before the Lord comes, who will bring to light the things now hidden in darkness and will disclose the purposes of the heart. Then each one will receive his commendation from God. (1 Cor 4.5)

Blessed is the man who remains steadfast under trial, for when he has stood the test he will receive the crown of life, which God has promised to those who love him. (James 1.12)

And when the chief Shepherd appears, you will receive the unfading crown of glory. (1 Pet 5.4)

Isn’t that mind-blowing? Somehow in the wisdom of God it pleases him to crown us for our genuine faith, even though our faith is only upheld by his power (1 Pet 1.5).

A joy greater than circumstances

Of course none of these things make suffering easy. The trials themselves are never joyful, nor are we specifically to find joy in the circumstances of the trial (as if we delight in pain). But we do have joy in this transcendent reality: the trials are necessary because our all-wise heavenly Father has ordained them for the proving of our faith, that we might receive praise and glory and honour from him. And of course, as we receive it, we will reflect all of it back to him as the one who upheld our faith by his power.

Our joy is not found in the trials, it is found in a hope and a future that is greater than our trials. God is working all things for our good.

There’s lots going on these days. It’s keeping me too busy to write much of substance lately. But, here’s a little glimpse into a few of the things that have got me pretty excited right now (in no particular order).

There’s lots more, but that’s a little highlight list. God is far too good to me and to our little church. I can’t wait to see his goodness even more in days to come.