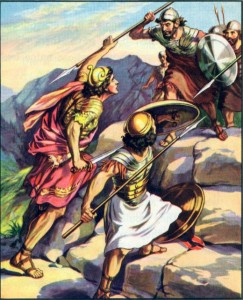 Saul is a foil character. A foil character exists as a backdrop against which the positive traits of the protagonist may be displayed. It’s bizarre that Saul would be one, because everyone in his day thought he was going to be the hero. It’s also bizarre because he is supposed to be the hero: he is the king of Israel!

In 1 Samuel 12, Saul experienced great victory in battle against the enemies of God’s people. All the people showed great faith in him as their leader, and the kingdom was renewed under him. 1 Samuel 13, however, tells a different story.

When the people lose faith in Saul (because they are astronomically outnumbered), Saul does the ‘wise’ thing from a human perspective. He goes ahead with the sacrifice that they needed to carry out before heading into battle. He knows there’s a time to act, and this is it, and the prophet who was supposed to do it isn’t here. It would be foolish to wait. Waiting would mean less people to fight with you. Waiting would mean looking silly as a king. Waiting would mean people would lose even more confidence in you.

When Samuel arrives, he pronounces judgement on the king, who has acted ‘foolishly,’ and announces that he will lose more than the battle–he will lose his throne.

Saul is the foil for Jonathan in the next chapter. Jonathan looks at the drastic situation (impossible by human standards), and says, ‘Hey, why not try something great and see if the Lord will bless it?’ So he grabs his armour bearer, and the two of them head off to take on the Philistines all on their own. That seems foolish–or at least foolhardy.

But sure enough, brave Jonathan, who ventures everything on God, is blessed! They show up and immediately strike down about twenty men, cause panic in the Philistine camp, and lead the whole charge for the Israelite army. Even the chicken-hearted soldiers who fled from his father’s poor leadership came out of the caves and graves where they were hiding to follow Jonathan.

Man’s wisdom resulted in condemnation. Saul rushed ahead and did what seemed wise from his vantage point. Jonathan examined the situation, but calculated how the Lord may be pleased to work, despite how things looked. He made the ‘foolish’ decision of risking much on God.

May God give me grace to know that kind of wisdom!