CNN: ‘The Demise of Guys’

From the CNN Health Blog: 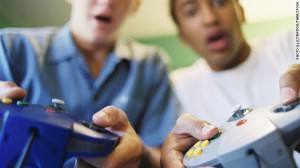 Increasingly, researchers say yes, as young men become hooked on arousal, sacrificing their schoolwork and relationships in the pursuit of getting a tech-based buzz.

Every compulsive gambler, alcoholic or drug addict will tell you that they want increasingly more of a game or drink or drug in order to get the same quality of buzz.

Okay, so now that they’ve told us what we already know, can we finally get back to a place where we admit that men & women are wired differently? For a while it seemed like we were supposed to believe that it was only social conditioning that made boys & girls different. So how do we explain why this problem is so heavily man-biased?

Interestingly, in his TED talk on this topic, Psychologist Dr. Philip Zimbardo laughingly admits he doesn’t know the answer to this problem. He says, ‘What’s the solution? That’s your job to figure out! My job is just to alarm you!’ I’ll give him points for honesty.

The answer, of course, is the gospel. Men were made in the image of God. We were made to be kings & conquerors. We were made to be his representative rulers, spreading his righteous kingdom to all corners of his creation. But sin has rewired men to seek their own adventures, to build their own kingdoms. Since that’s easier to do in a pretend world where we can always win, we choose the safe route, conquering digital enemies and winning digital women.

But the good news of what Jesus has done for us is this: God re-creates us in Christ. We die to sin and are made alive to God. We are given a new heart; we are re-wired to live for conquests that mean something. We are remade as image bearers who live like him and rule like him and put ourselves in harm’s way to serve the weak like him.

Dr. Zimbardo was right and wrong. He was right that he doesn’t know the answer, but wrong that it’s our job to figure out the answer. God showed us the answer when he sent his Son to suffer and die a very real death for a generation of men who have lived fake lives in a fantasy world. Jesus answered the problem finally when he rose from the dead to give us new life and to make us again in his image. This time with a real kingdom to live for.