When Christians Hear the Word

Sometimes I think I brag about the work that God is doing in our church too much. But then I get to speaking with brothers from other churches who are caught up in programs and boards and committees and all that stuff and they are so negative about church… it really makes me sad. They speak about the divisions and politics in their church and how much of a pain certain people are. It breaks my heart. Church, in so many places, seems to be so… distracted with things (just about any and every thing!) other than the word of God.

But it does help me to realize that there are a lot of churches out there that aren’t full of Christians, where the word isn’t preached, and where people don’t love each other and get actively involved in each other’s lives. That all makes me want to talk about our church more, because it makes me think that so much of what happens in ‘evangelicalism’ today is just merely a result of a whole generation of people being in dead churches. They’ve never seen what real, biblical, vibrant Christian church is… so they resort to programs and ‘conversation’ with the goal in mind of completely reinventing the wheel.

Let me just give you a glimpse of what life is like at GFC. A little while ago the Preacher was preaching through the first part of Romans 13, where Paul instructs the Roman Christians to be subject to authorities as to God. Since then I can tell you from experience that without me saying a word, I have been in cars with multiple people from our church who I know used to speed, who now consciously drive the speed limit.

A little while ago another brother happened ‘just by chance’ to be walking with his wife when he happened upon some people cleaning out (throwing out) a bunch of their office software. The great thing about this is that this brother had been convicted in his conscience by Romans 13 to clean off all his pirated software from his computer. Within days of taking this step of faith, not knowing how he would be able to continue to work on his computer, he ‘happens’ upon all the free software he needed. Awesome! 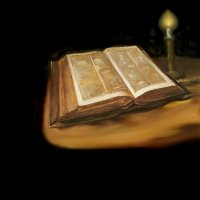 These are small things, yes, but they are microcosms. When the word is preached, Christians come. We are not the largest church around, that’s for sure, but we are a church made up mostly of truly regenerate people. This is because true Christians are hungry for the word. When they hear it somewhere they stay there. When they stay there and submit themselves to the word as it is preached, the Spirit uses the word to bring about changes in their hearts. As their hearts are changed, their lives change. Sometimes in small ways, other times in large ways, but there is always change.

So I ask again, why look for new ways? Why try to reinvent church? Why try to get God to work in a way other than how he has said he will work? The church was created as a place where the word of God would be read publicly, expounded powerfully, and sung passionately… why do we need anything else? When you preach the word faithfully, you may not pack out the house, but you will fill it with Christians. And the Christians that come will be moved by the Spirit; they will respond with convicted hearts and changed lives. What more could you hope for than that?