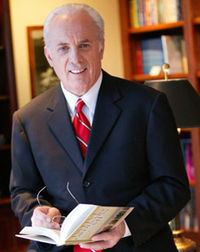 Five quick wrap-up thoughts before I wave the white flag, pull up a chair, and receive the rest of the series from Dr. MacArthur on how the ‘Young, Restless, Reformed’ movement needs to ‘grow up.’

1. After observing the comments I’ve seen that MacArthur was right.

There is a real part of our movement who simply aren’t willing to move past feeling misunderstood to genuinely learn from John MacArthur, an older man. We need to do that. That was the point of my first post. Though it’s hard, we need to listen.

2. After observing the comments I’ve seen that I was more right than I thought.

John MacArthur’s sometimes harsh tone has created a movement of people, some of whom (note: definitely not all), are also characterized by a harsh tone. In their minds MacArthur has earned the right to speak the way he has and they are in agreement with him, so now they get to speak to the rest of us in harsh tones. We can never be too careful about the things we get excited about as leaders, because those will invariably be the things our followers get excited about. Some of the vitriol from the rabid MacArthur supporters has actually served to prove my point, and the arrogance of some of the commenters who say they are with MacArthur actually makes it harder to listen to the man himself.

Nevertheless, we  all—especially me—need to fight the urge to defend ourselves. We need to swallow our pride and listen to MacArthur. I want to actually hear the man, not be distracted by some of the misguided enthusiasm of some of his followers.

3. While the biblical standard is the younger receiving counsel from the older, the Scriptures are replete with examples to the contrary. Only a foolish person closes his ear completely.

I don’t know Dr. MacArthur personally, but in conversation with someone who has worked closely with MacArthur I’ve learned that he actually does receive and process criticism. Praise God! I’m greatly encouraged to hear that! I hope that he continues to hear us as we continue to hear him. We can both, then, let the ‘clean sea breeze’ of the generations clear our minds and refresh our thinking so that all in the body may be served and blessed by each other. My concern in this point, then, isn’t so much for Dr. MacArthur as for many of his followers who might be tempted to think they have nothing to learn from those outside their camp.

4. A final appeal to Dr. MacArthur (but especially to his team): Please, we want to hear you; don’t treat us like the enemy.

Mocking isn’t cool. It doesn’t help. Don’t make this an ‘us’ and ‘them’ thing. We’re on the same team. Don’t tell us ‘listen like men’ as if we’re all immature sissies. Some of us are doing really hard things for Jesus (I’m speaking of others here, not myself). Yeah, we need to be corrected, but we need to be corrected in love. And just speaking truth doesn’t make it loving. Tone, posture, and approach  all matter too.

And by the way, there are more than just men in our movement. I tend to think women are pretty adept at theological conversation as well. Don’t remove them from the equation so quickly.

5. After all is said and done, I’m more eager than ever to try to hear MacArthur.

Being misunderstood by many of the commenters in my previous post has renewed my conviction to be a careful and discerning listener, weighing what is said, and taking into account from whom I’m hearing it (2 Tim 3). Dr. MacArthur is a proven faithful preacher and exegete. I’m not. So I want to listen to him—and listen in such a way as to learn; even if it’s hard.