Questions the TDSB Is Not Answering

As many of you are aware, our church plant has been going through a battle of sorts with the Toronto District School Board about some drastic overnight increases to our rent (to the tune of 400+%). Our current response is to pray, appeal however we can, and look for somewhere new to meet as a church as soon as possible.

The story itself has been well documented in Canadian news (National Post, CTV and again, Toronto Star, Toronto Sun and again, CFRB 1010, Winnipeg Free Press, etc.), and also in international news (WORLD Mag, Christianity Today, and an upcoming WDCX interview one week from today). Because of the public pressure that has been mounting, the School Board has been scrambling to create canned responses for newspaper reporters and also for people who write the offices of their local Trustees to complain.

But despite all the rhetoric from the School Board, there are still some pretty profound questions that I think need to be answered in this situation:

In their own ‘Community Use of Schools‘ policy document, they state:

The Board will actively collaborate with the governments of Ontario and Toronto to achieve solutions and ensure affordable and accesible use of public space for community-based programs.’

To make the space affordable the TDSB receives funds from the Provincial government which they then effectively pass on to community groups through various subsidies. Some groups are classed at a higher level of subsidization than others, but all not-for-profit groups receive these provincially supplied subsidies.

Back in February when this Policy was adjusted, they singled out one group alone to bump them out of both subsidized categories. ‘Faith based organizations’ alone are singled out as the one charitable group that will not receive subsidies.

My question is this: If it is government money being passed on and we are a government-recognized charity, on what basis does the TDSB determine that we alone should not receive subsidization?

Why is the TDSB content to act in a manner inconsistent with their own internal policies?

Again, according to the TDSB’s own Policy on Community use of schools, there is a distinct desire for community engagement. They say they want to see their schools become ‘hubs of the community.’ This is how they word it:

The use of public assets such as schools and civic buildings should be guided by the needs and priorities of the local neighbourhoods served by these public buildings. Access and equity in use of facilities is particularly important in a community as ethnically diverse as Toronto.

So why (if one of the needs of the local community is more churches) should churches be excluded and denied ‘access and equity in use of facilities’ through higher permit fees?

But there is more. The TDSB’s Human Rights Policy (which itself specifies that it covers ‘permit holders’) details how they should act in this case. They expect that they will:

take reasonable steps to remove any discriminatory barriers in employment policies and practices and in accessing programs, resources, and facilities

And yes, ‘creed’ is specified as one of the bases forbidden for discrimination. So my question, again, here is simple: Why is the TDSB so content with ignoring their own policies in order to raise the rent in a way that discriminates against faith-based groups and limits their access and equity of use to these public buildings?

How does the TDSB justify the dollar amounts they have placed on these faith-based groups? 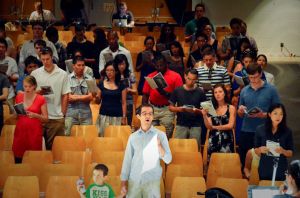 The case may be stated (and has been) that the School Board has been losing money on these permits, even with the government-provided subsidies. As a fiscal conservative I have no problem with them taking action to eliminate an operational deficit.

However, because the TDSB is a public organization, they ought to make their financial decision-making-process public. How did they decide on these specific amounts?

Let me give you an example. Our permit renewal application came to just under $61,000. Of that, they specified that $25,000 would be for providing caretaking services. I am fine with that. There is a cost and we are using the building, we are happy to cover the cost.

But what is the other $36,000 going toward? Are we really using that much toilet paper and hydro? Did they just grab that number out of the air? The TDSB has committed themselves to ‘report regularly to the community on the fees and costs incurred in using community spaces’ (here), but in this instance, they are mum about the calculation of these permit fees.

They must answer the question: Where did these numbers come from? We are not looking to impoverish the public school system, but as taxpayers we want to know: How are these fees justified?

Why did the TDSB not give its permit clients more than 3 days notice before they increased the fees so substantially?

In their public statements in the press over the past few days the TDSB has been saying that there was a ‘public process’ that was carried out and brought to conclusion in February last year. But unless you happened to attend that ‘public’ meeting of the Board of Trustees on that particular day or read the minutes of that specific meeting randomly for fun, the decision was not so public.

Any by-law changes or zoning changes in a neighbourhood or any rent increases between landlord and tenant require sufficient notice be given proactively. How could it be that the TDSB could make a decision that would so drastically affect so many of their permit holders and then not think to tell them until three days before the permit goes live?

In our case we were informed of our permit rates on August 28 and the first bill was to be processed on August 31. Why did they not give us more notice than that?